Home » Gardening » Treating diseases and pests » Armillaria root rot, a devastation for all types of trees

Armillaria (or root rot) is a disease caused by a fungus that attacks ligneous plants. Ligneous plants are all those plants made of wood.

It propagates readily and weaves its way underground to great distances. This makes it a nefarious parasite that strikes down a great number of plants in the area. Learn more about this invisible killer to identify it, treat against it, and prevent its appearance.

To fully understand the disease caused by Armillaria, it’s important to understand the biology of fungus in general. Indeed, what we typically call “mushroom” is only the fruit (sporocarp) which extends out of an underground portion called the mycelium. This invisible part is a web of uncountable filaments that branch out in every direction. Usually they’re whitish in color. It can spread over quite a large area. This key to understanding mushrooms is essential, since it explains how this parasite reproduces and spreads. Moreover, it’s necessary to note that not having any “mushrooms” doesn’t mean that there isn’t any “underground mycelium” beneath the surface. And it also doesn’t mean the mycelium is dead or inactive! In fact, a great many plants can die due to root rot before even the first mushroom appears.

The armillaria fungus has many different ways of infecting new hosts. It typically spreads to healthy plant specimens simply because their roots touch those of diseased plants. There’s another, more aggressive way for the mushroom to spread. It’s just as insidious because everything also happens underground. Thick, black strands develop that look a lot like roots. They’re called rhizomorphs. These form at a depth of 1 to 3 feet (15 to 45 cm) in the ground, and they spread continuously at a rate of 3 feet a year (1 m). This explains how we sometimes observe contaminated plants even if they’re dozens of yards (or meters) away from the original point of infection. Because of this long-distance, hidden propagation, Armillaria is definitely a fearsome pathogen.

Which plants get sick?

There are two types of diseases: one striking deciduous trees (Armillaria mellea) and the one contaminating conifers (Armillaria ostoyae). It’s clear – this mushroom infects anything that has ligneous fibers in it, a fancy way of saying “wood”. Sad to say, there isn’t a single woody plant species that is 100% immune against this parasite.

Here’s a more detailed list if you need one:

Plants that are vulnerable to root rot

Luckily, some plants are better than others at resisting infection by this disease, though they aren’t immune to it.

If you’ve had armillaria in your plot, planting these should make it harder for the fungus to strike again. 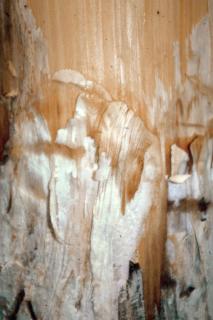 When infected with this disease, the plant starts having dead roots that start decaying. If you pry a root open, you’ll notice the typical white filaments (the mycelium) weaving its way between the bark and wood of the roots. A strong mushroomy smell will appear. The portion of the tree or shrub where the roots and trunk connect, called the collar, might also show similar symptoms. The trunk itself might also be infected, up to 3 feet (one meter) above ground level, but this isn’t as common. It’s theoretically possible to detect this parasite by unearthing its rhizomorphs, but practically it isn’t worth trying because they’re deep into the ground and their color matches that of the soil.

Honey fungus triggers a breakdown in the plant’s root system. The plant then develops all the symptoms that are related to a faulty supply in water and nutrients, most telling of which is wilting:

Note that a hot, dry Summer might worsen these symptoms.

To this day, there aren’t any chemical treatments available to fight against honey fungus. When the diagnosis shows that the mushroom is there, the only way to get rid of it is to dig it out to remove all the infected roots and stumps. In the end, burn anything you find. Rhizomorphs that still lie untouched underground won’t be able to feed anymore, and they won’t be able to spread. 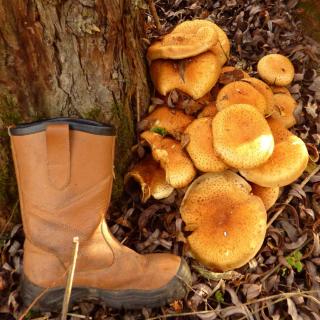 To avoid honeyfungus altogether, the first solution is to avoid planting vulnerable plants that might be infected by the mushroom in known areas of infestation. Working the soil deep down on a regular basis will cut and destroy rhizomorphs and reduce their spread.

As for many other diseases, sanitary precautions play a big role in preventing appearance. It’s a good practice to always disinfect your garden tools after use in the garden or vegetable patch.

When in a zone that has been proven to host honey fungus mycelium, a radical solution will keep it from spreading. The idea is to bury a physical barrier at least 1½ feet deep (45 cm) and one inch (3 cm) high. An adequate product is the typical rhizome barrier used for containing bamboo and raspberry bushes, but any other plastic obstacle will do. What matters is that it won’t break as it’s buried.

Bean blight, 5 diseases that cause spots and wilting on beans
Beans are a favorite in the vegetable patch, and not only for us! Many types of sickness-causing fungus and bacteria…
Mushrooms growing in the lawn and garden, should I worry?
No need to trek all over the forest to find mushrooms. They also grow in gardens! Some are edible, but…
Septoria, a leaf spot fungus destroying harvests – learn to destroy it instead!
Septoria is a species of fungus that infects vegetables, trees and ornamental plants. In some cases damage is insignificant, in…