Home » Gardening » Special reports » Mushrooms growing in the lawn and garden, should I worry?

No need to trek all over the forest to find mushrooms. They also grow in gardens!

Some are edible, but be very careful: others are toxic and poisonous.

Mushrooms that pop out of the lawn in gardens aren’t as well-known as the should be. As a consequence, they don’t have a very good reputation. The upside, for sure, is that it’s easy to spot them. The downside, of course, is that anything curious attracts children and toddlers, and parents grow wary of such unplanned discoveries… The first rule, the most important one, is always “Don’t touch them”. To eliminate mushrooms, use gloves to pick them out of the ground. Try to pull the base out entirely to remove most of the mycelium, too. Plunk the mushroom in a sac to dispose of it. You might think of mowing them over, but it isn’t a good idea: it would spread spores that will simply grow back more abundantly than before.

If you haven’t any toddlers roaming around the garden, then go ahead and let them grow: that way you can identify them and learn more about each species. Most are completely harmless. They generally belong to the kind of mushrooms called saprophytes: they feed on dead and decaying organic matter. They often appear on old stumps, fallen tree trunks, rotting roots, or interspersed with lawn grass roots.

Is this mushroom edible or not? 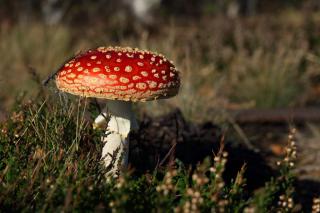 Other species actively attack live plants, such as conifers, weak deciduous trees and shrubs, and, in time, might even kill them. These are the necrotrophes, the most common of which is Armillaria mellea, commonly called honey fungus. It develops on tree trunks. This mushroom is often harvested for food in Eastern Europe, but in most Western countries it doesn’t have much culinary value. With good reason! It’s toxic and dangerous if eaten raw! When cooked, it isn’t dangerous anymore, but it’s difficult to digest, honestly.

Take note that it’s fairly common for poisonous forest mushrooms to appear in gardens, especially around trees. This is in particular true for the common (or brown) roll-rim mushroom (Paxillus involutus), which has gills that turn reddish when wounded, and stripes along the edge of its cap. Another poisonous one is the fly amanita, often appearing near birch trees. 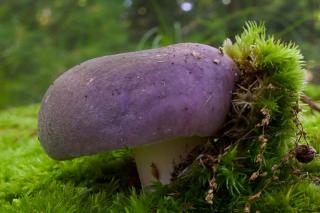 Happily, there is a number of much more friendly species, such as the brittlegill family Russula with the “entire”, the “coal burner (a young one shown here) ” and the “bare-toothed” species. It loves growing under deciduous trees, and they’re perfectly edible when cooked. Another wild family that is a cousin to the famous “champignon” table mushroom is the field or meadow mushroom. These can be eaten both raw and cooked.

It’s important to show your harvest to someone knowledgeable, such as a pharmacist or doctor, before cooking and eating mushrooms.

Credits for images shared to Nature & Garden (all edits by Gaspard Lorthiois):
Garden mushrooms with grass (also on social media) by Sigfrid Lundberg under © CC BY-SA 2.0
Fly amanita – toxic! by SimoneVomFeld under Pixabay license
Russella cyanoxantha by Adam Bryant under © CC BY-SA 4.0
Meet the community
Need advice? Share your garden joys & woes!
Live from the forum
Edible mushroom or not? Mushrooms harvested in forest, how to freeze them

Growing mushrooms on coffee grounds
Mushroom lovers, great news! For one, they are a good source of nutrients for our bodies. For the other, you…