For permaculture, a major source of inspiration is old growth forests. Have you ever seen a forest with bare soil? A thick layer with dead leaves covers everything, and the earth beneath it feeds on humus that appears as leaves break down. All “pros” and no “cons” for mulch! Why is that we don’t see more of it in gardens?

Mulch in permaculture, how does it work?

What does mulch do your soil?

Which mulch for permaculture? Advantages

These make for an excellent amendment. These are loaded with carbon, and mushrooms slowly dissolve them to produce soil humus. These fungus require moisture to go to work, so remember to throw a pail of water over them if it gets too dry.

Directly stimulate soil bacteria. There’s lots of water content in them, and the amount of nitrogen they release is tremendous. Quickly converted to better soil.

Apply only in very thin layers if using fresh trimmings. Sprinkle it lightly, since thick layers will clump up and rot. Rotting lawn trimmings produce too much heat and don’t match the needs of soil organisms.

Read also: How to use lawn trimmings in the compost

Spread these out as a single layer, and then cover it with another type of mulch to lock moisture in and keep it beautiful…

How to use mulch for permaculture 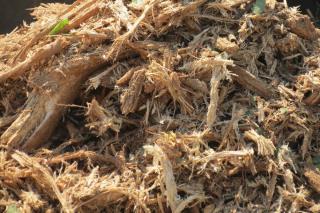 Don’t bury plants under the mulch. Specifically, make sure the root collar of the plant remains free, this is where the stem meets ground level. How thick to layer the mulch depends on how fast it breaks down and how long it’s expected to stay:

Plan for a thick layer of brown mulch, spread all around the stem or trunk. It should last a full year. Spread it in Fall, when the soil gets a lot of natural rainwater.

Adjust the thickness to the size of the plant. Remember to mulch again during the growing season.

Growing mushrooms on coffee grounds
Mushroom lovers, great news! For one, they are a good source of nutrients for our bodies. For the other, you…
Permaculture main principles and definition
Ready for your first steps in permaculture? Whether your garden be big or small, laid out already or still in…
Green manure, use cover plants to fertilize the next harvest!
It protects the ground from weeds and enriches the soil with nitrogen and humus: green manure scores perfect on all…