Underlying the success of every garden is the health of its soil – this is particularly true in permaculture. Fertilize it with fresh nutrients like compost, maintain it, disturb it only when absolutely necessary: your soil will stay healthy and fertile, and its quality will increase continuously: here is how to care for the soil in your garden.

Forest soil: the model to emulate

If there’s one thing you need to remember about permaculture, it’s that soil health is paramount. Live soil replete with living things, constantly fed with fresh nutrients, will naturally turn more and more fertile. For instance, in a deciduous forest, man doesn’t need to amend the soil to make it more productive. Dead leaves fall to the ground in Autumn and break down into nutrients thanks to recycler insects and micro-organisms. This becomes humus that feeds more life and fertilize soil. In the following Spring, trees delve into this rich substance to create new leaves, which in turn will dry out and fall again… A cycle of taking and giving back, where more is returned than was ever consumed. This everlasting cycle goes on indefinitely without the faintest help of mankind.

No chemical fertilizers: compost replaces them

The same can happen in a permaculture garden, too! Chemical fertilizers have no place in such a garden. At most, you might want to purchase manure or compost if ever you can’t readily find it, but even that shouldn’t be necessary: you can simply recycle whatever materials are already available nearby. What is waste for someone else can become black gold for you. In short, simply give back to earth that which earth has given us. Compost is the main player here: it’s practically compulsory in permaculture.

Soil isn’t just a layer of dirt. There are actually different layers to it. Each layer is an “horizon” that has very specific characteristics, which different sets of living beings call “home” (fungus, insects, worms, mites, bacteria, and much more…). These living creatures big and small transform organic matter into humus, and, later on, into nutrients that plants can absorb directly. Without all this life going on, you only have dead, sterile soil that quickly loses all nutrients.

Whenever you till the ground or flip the top layer upside-down, you completely destroy the structured layers it’s made of. For sure, you might avoid a few weeds, but the delicate balance the soil had reached takes years to restore. In a forest, no-one ever comes to till the soil, and it’s one of the most fertile soils of all! With permaculture, tillage and soil preparation is reduced to a minimum. A spading fork breaks it up a bit and aerates it, but that’s about all. This light, minimally invasive step doesn’t destroy underground life and keeps each horizon aligned as it should be. And not many gardeners will complain about this: spading and tilling are among the heaviest tasks of all!

Nature hates empty spaces – permaculture does, too! There is rarely any benefit to exposing the surface of soil to sun and rain. First tasks should thus be to organize your crops so that you can plant the next crop right after having harvested the previous one. This isn’t always possible, nor may it be enough: there are other tips to help keep the soil covered. 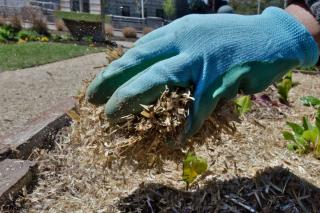 Always cover the soil, both at the foot of your crops and on the pathways between them. There are 4 advantages to this:

If the mulch you set up is organic rather than mineral, all these advantages come together. Mulch produces humus as it slowly degrades. Several different types of mulch are very effective: semi-ripe compost, shredded greens, ramial chipped wood (or BRF) you can produce from hedge clippings and tree pruning waste. Equally good are lawn clippings, dead leaves, even simple brown carton boxes (with the least possible ink and scotch tape).

In permaculture, you can even compost material right along the ground. This is called surface composting. Practically speaking, simply cover the ground around your crop stems with whatever you need to compost mixed in with a little straw. It’ll break down right where it’s needed. It’s a great way to combine the advantages of both composting and mulch!

Green fertilizer, or green manure, is also a favorite option to structure and aerate the soil. The root systems of these plants penetrate the soil, while leaves and stems cover and protect it. Everything becomes fertilizer when the time has come to cut it back, especially for green manure that comes from legume family plants such as white mustard, broad bean, vetch, pea, clover, all of which capture nitrogen from the air and store it in nodules along their root systems. In the long run, this nitrogen becomes directly usable by other plants when the roots decompose. 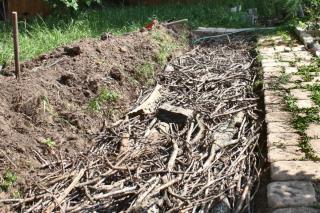 Permaculture allows for many novel growing techniques for lots of vegetables, herbs, and even annual flowers, whatever soil your plot is made of. Even if it’s very poor, too thin, too wet or too dry, or perhaps even not suitable for planting, you can still have a go at a permaculture garden. Cities can have permaculture gardens, too! Since the goal is to always improve on the soil you already have, turning it into rich, organic matter with lots of life, it doesn’t matter what you start out with.

Read on for the next steps: Permaculture: sustainability, self-reliance and profitability

Smart tip about fertilizing in permaculture

Remember that the goal is diversity and equilibrium: every year, try a new way to fertilize your garden. This will increase microbial diversity greatly every time a new technique is used!

How to rotate crops in the vegetable patch
Crop rotation helps generate abundant harvests. It's also very effective at reducing crop diseases and maximizing nutrient availability for plants.…
Biodiversity in permaculture for a self-sustaining garden
In permaculture, nature does all the work! For a permaculture garden to be sustainable, self-sufficient and properly balanced, it's important…
Permaculture, nature is the ultimate teacher
Permaculture is the art of following biological insights gleaned from considering nature as a teacher. Key is the observation of…