Home » Gardening » Treating diseases and pests » Green manure, use cover plants to fertilize the next harvest!

It protects the ground from weeds and enriches the soil with nitrogen and humus: green manure scores perfect on all counts!

Sow it in the vegetable patch as soon as a plot is free.

Green manure is what fast-growing plants used to cover the ground are called after a plot has been harvested. Medick, clover, mustard, phacelia, white lupine, rape… these are all useful plants.

If sown in the vegetable patch as soon as the ground is bare, they keep weeds from settling in, avoid erosion due to rain, and for places with high slopes, they guard against landslides. Their roots hold the soil together and thread through the ground, making it lighter. Once they’re buried, they break down and provide nutrients that make it richer.

Green manure is sown just like a lawn, simply broadcast on soil that has simply been run over with a rake. You can sow at the beginning of spring, the end of summer or in fall, before it freezes. A good practice is to sow just after you’ve harvested.

After that, before the plants bolt or go to seed, mow the green manure on the patch or cut it with a scythe, dry it for a few days and turn the soil over to bury it with a spade. Four to eight weeks later, depending on the plant, you can start your seedlings and regular crops.

How to choose your green manure? 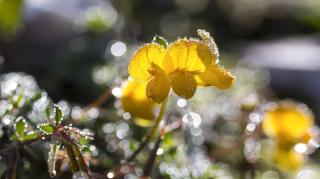 Depending on your soil type, some plants will do a better job than others. Medick and mustard are great green manure for clay soil, while phacelia will grow on any type of soil. Whatever you plan to grow later on the plot can influence the decision, too.

Meet the community
Need advice? Share your garden joys & woes!
Live from the forum
Repotting or topdressing a kumquat tree Fertilizer for home palms. Need recommendations Mimosa fertilizer in a pot indoors about my Madagascar Jasmine which is too leggy

Grow a garden full of herbs… beautiful ones!
Herbs, today, are definitely among favored options when planting an ornamental garden. Purple basil, the many varieties of oregano and…
Garden without any garden chores: make it a reality!
Savoring the garden without spending hours mowing or weeding it is the unfulfilled Quest of all gardeners. Though we dream…
Potato beetle, strike this striped pest at the heart!
These little striped beetles are definitely a hassle! The Colorado potato beetle devours leaves with terrifying speed! However, there are…