In the 16th century, watercress was already known and grown for its medicinal properties, and only slowly started being used for food.

Later on, in the 19th century, the growing of this leaf vegetable spread and, up to today, the dark green leaves are still collected manually.

In France, this plant that thrives in upwellings of groundwater is grown in Central France, where several varieties are cultivated.

In India, medicinal properties attributed to its seeds are typically antidiarrheal, diuretic, invigorating and even aphrodisiac.

Watercress is a herbaceous plant, native to the Middle East.

What exactly is all this about?

In the year 1130, the word “watercress” was introduced into western languages.

It comes from the root word “kresso” which means “crawling” in an ancient French dialect.

Garden cress, which is a related but different plant, is disctinct from watercress.

Some think it comes from Africa, and others believe it hails from Wester Asia.

However, ancient Romans, Greeks and Egyptians had included it in their diet and particularly loved its spicy taste and its therapeutic properties.

Watercress quickly spread through Europe and the world.

What are the main watercress varieties?

Part of the Cruciferae family, watercress grows in several cultivars that have different growing seasons throughout the year: it’s thus easily available anytime of the year.

The following may be marked as relevant:

– Land cress, Barbarea verna: harvested between July and March. Its leaves are shiny and deliciously peppery.

– Cuckooflower or Lady’s smock, Cardamine pratensis: this plant was grown to replace watercress at times. It spontaneously appears in moist spots, and its leaves are more firm.

From a therapeutic point of view:

Since it has anti-oxidant properties, watercress is said to have positive effects on eyesight. It also helps prevent appearance of certain types of cancers.

What exactly is all this about?

Indeed, research has shown that watercress and garden cress both contain high levels of flavonoids and carotenoids, albeit in varying proportions.

These antioxidants prevent development of cardiovascular disorders, of various cancers (breast, lung), arterial hypertension and other disorders related to ageing.

These main antioxidant compounds also protect cells of the human body from the wreckage that free radicals sow in various organs.

Consequently, since they’re abundantly present in cress, these two carotenoids and vitamin A precursors accumulate in the eye’s retina and macula: this protects them from oxidizing stress which is damageable to the eye’s health.

Aside from that, cress (watercress and garden cress) contains

However, the calcium contained in milk more readily transfers to the blood stream.

– vitamin K. In this case, garden cress has higher amounts because it has the higher levels of vitamin K. This vitamin helps ensure proper blood clotting.

However, even though it is recommended for persons under a medical course of anticoagulants, watercress, just like spinach, broccoli, asparagus, brussels sprouts and silverbeet must be eaten in moderate amounts.

Indian beliefs even hand cress the power to stop hiccups. 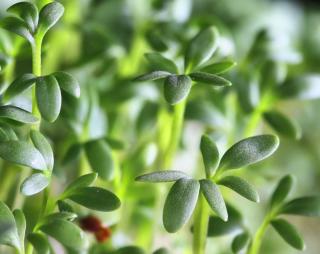 In Indian cuisine, they are an integral part of their preparations.

Their high ratio of insoluble fibers have led many experts to encourage adding them to our diets as ingredients: they would reduce vulnerability to developing chronic diseases.

Tips and advice on cooking with cress

Cress, both watercress and garden cress, can be ingested in the following manners: 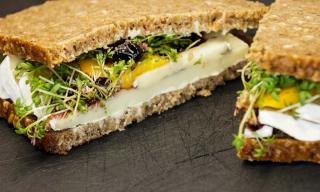 – mixed salads, if possible together with its seeds and black, white and red pepper grains. Add a simple salad dressing (oil, vinegar or lemon juice) for extra taste.

– chopped and tossed into mashed potatoes or puree.

– as greens in a sandwich.

– in a sauce to pair with fish or meat.

– as a warm soup in winter and cold gazpacho in summer. Add a couple butter or olive-oil fried potatoes and leek, a dash of cream and chicken or vegetable broth.

– as an extra ingredient to season fowl or poultry…

Good to know about cress

Patients who are at risk of experiencing urinary lithiasis must absolutely reduce their intake of oxalate-rich foods. If possible, such persons should avoid ingesting watercress.

Also note that since boiling cress leads to a significant amount of leaching of glucosinolates from the plant to the cooking water, it’s preferable to eat your cress raw. However, you may simply sautee your water or garden cress in a pan or boil it in a small amount of water and you’ll be retaining most of its benefits.

Since this plant tends to accumulate pollutants in its tissues, harvesting watercress in the wild isn’t recommended since toxic doses may be reached. Indeed, you never know which pollutants might be found in a lot you’re not familiar with.

If in doubt, feel free to ask your consulting physician, pharmacist or doctor.