Little spots similar to tar spots appear on leaves. This disease is rarely deadly, although it does lessen the beauty of your Photinia.

Read on to learn about how to treat the disease and what causes it.

Since the fungus spreads through splashing water from shrub to shrub, you can prevent photinia leaf spot if you :

How to treat photinia leaf spot

Once leaf spot disease has appeared: 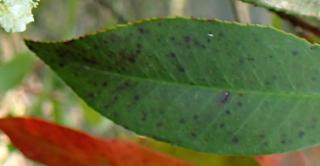 A fungus called Entomosporium maculatum is what causes leaf spot on photinia. It is a microscopic fungus that overwinters on twigs and leaves that have fallen on the ground.

From all the photinia species, one of the most vulnerable varieties is the “Red tip” Photinia x Fraseri.

Entomosporium leaf spot is usually harmless in most climates, especially where summers are hot and dry. However, in moist climates with very wet spring and fall seasons, it may prove fatal to your photinia hedge.

Photinia is a wonderful hedge shrub and it’s often grown as a hedge. When leaf spot appears, it’s time to check for alternatives that may also bring joy without the hassle of dealing with the disease.

Can Photinia leaf spot spread to other trees and shrubs?

This particular strand of leaf spot, Entomosporium, can directly infect other members of the Rosaceae family such as:

A favorite shrub that resists leaf spot is holly, as does its North-American endemic counterpart yaupon.

Beautiful flowering alternatives include Escallonia, Mock-orange, Weigela, Camellia and a host of other flowering-bearing hedge shrubs.

Spotted laurel is also beautiful, with built-in yellow spots on its evergreen leaves that don’t endanger the plant as a fungus would.

If you’re preparing cuttings from your favorite photinia, try to collect cuttings from specimens that aren’t infected to make sure the disease isn’t propagated, too.

Trimming hedges, the right time
When should a hedge be trimmed, what is the right timing, and how should one go about it best? Often…
Set up a mixed hedge, different shrubs for year-round wonder
Setting up a mixed hedge fulfills all the functions of a normal single-species hedge, and provides an added aesthetic touch…
Spring blooming shrubs
Wonderful at the beginning of spring, these shrubs are among the first to celebrate spring in our gardens, balconies and…