European brown rot is a fungal disease caused by fungus that attacks fruit trees and can seriously impact harvests.

It targets fruits and makes them rot. This disease is characterized by rotting fruit and is caused by Monilinia, a family of fungus species.

The only way to get rid of this disease is to deal with it as soon as fruits and leaves have fallen and prepare for the following season in spring.

Conditions leading to appearance and spread of European brown rot

Like most fungal diseases, moisture is what triggers its appearance.

Most fruit trees can be hit. 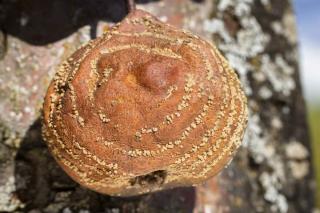 A brown blemish appears on the fruit, which softens until mushy, and spreads to cover the entire fruit. In its final stages it wrinkles the fruit which ends up entirely rotten. Sometimes it looks like rings spreading around the fruit.

Fruits then turn grayish and develop a granulated texture, and stay attached to the tree all winter long if not removed.

It is very important to get rid of them and destroy them.

On the picture, a pear tree infected with rotting fruit disease give the impression of fruits that rot while still on the tree.

Treating against brown fruit rot must be done in stages throughout the year, with the first step at the time that leaves and fruits fall from the tree, in fall.

Fruits should not touch, otherwise the fungus will spread much too quickly. The fungus tends to make sick fruits stick to nearby healthy ones to spread more easily.

More than anything, avoid wounding the tree. If you detect a wound on any portion of the tree, protect it immediately with wound-healing paste.

Kumquat, a tiny, original citrus
Kumquat is a citrus for which you can eat the skin together with the cute fruits. Key Kumquat facts Name…
Raspberry bushes, delicate fruits
Raspberry is easy to grow and the harvest is abundant. Key facts for Raspberry Name – Rubus idaeus Family – Rosaceae…
Sooty mold, techniques and organic treatments to avoid it
When leaves are covered with a blackish substance, similar to black soot that would have collected overnight, it is a…