Generally, this happens end of May or beginning of June, and can last until July.

Refer to our guidance on how to effectively fight against cherry flies, and you’ll spare yourself the disappointment of seeing your cherry harvest ruined. 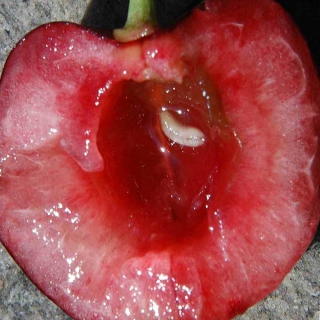 From under the tree, suspicious cherries can be noticed, but picking an infected one makes it easier to identify the pest.

Which cherry tree cultivars are most hit? 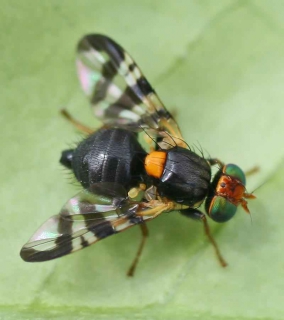 It’s a small fly that belongs to the Rhagoletis family. There are a number of variations that look very similar:

These all are about a quarter-inch (4 mm) in size and are hard to see on the trees. They hover in flight as they inspect cherries to lay their eggs in. The maggots start off tiny and nibble around the pit until they’re about 1/4th inch (4 mm) long.

Here’s a video that shows the cherry fruit fly

Best way to treat against the fly

Smart tip about the cherry fly

Start harvesting your cherries as soon as the first ones are ripening. Since the cherry fly usually lays eggs in soft, ripe cherries, you’ll be depriving it of potential nesting spots, while ensuring you at least get some fruits for yourself!

While picking, immediately eliminate cherries that show signs of fruit rot, and spray your hands with alcohol or disinfectant to keep the disease from spreading.

Scab, avoiding the disease
Often called apple scab, this fungus is responsible for important damage to this fruit tree, but also to plum trees…
Plant fruit trees!
Cherries, apples, pears… What a joy it is to harvest the fruits from your own garden! Fall is the perfect…
Beneficial insects that lend us gardeners a hand
These feed on pests, help plants reproduce, and give the soil better structure. Beneficial insects really give us a real…