Home » Gardening » Treating diseases and pests » Bean blight, 5 diseases that cause spots and wilting on beans

Beans are a favorite in the vegetable patch, and not only for us! Many types of sickness-causing fungus and bacteria also love to infect bean plants. They cause brown or yellow spots,wilt, and other issues on bean leaves, bean pods and vines. Here are the main culprits responsible for bean blight.

Fungus and bacteria trigger the following five of the many diseases bean plants can catch. 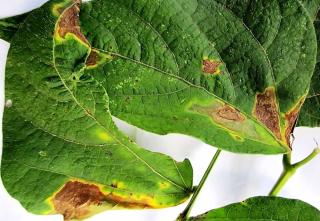 Common bean blight, or common bacterial blight, is the result of infection by either of two related bacteria. One of  these also infects citrus plants, so it’s more likely to appear if you’ve also got a citrus orchard nearby.

Phytophthora blight is a plant disease where bean pods turn mushy and mold away. Usually this happens when the pods form near the soil. Varieties with very long pods like string beans are more vulnerable since they occasionally reach down to the ground.

Halo blight: round spots on leaves and pods

Halo blight results in round spots forming on bean leaves and pods. In extreme cases, vines dry out.

Note the last word in the name to distinguish it from halo blight above: the “pathovar” descriptive is different. This is the same species of bacteria as above, but it’s a different group within the species. Interestingly, symptoms are different because the spots on the leaves don’t look the same. For instance, the color of this infection is a deep brown, hence its other common name: chocolate spot of bean. 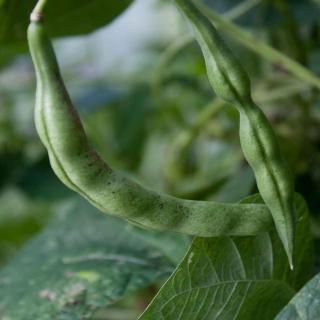 The bacteria causing this disease also infects other host plants. Initially, brown spots form that seem swollen with water. As it spreads in the plant, it eventually reaches the root system. It causes the roots to rot, to the point they can’t channel water to the vine and stem anymore. In a few days, leaves show signs of chlorosis, the plant wilts, dries up and dies from tip to root.

The first and most effective manner to avoid having to deal with these diseases every year is crop rotation. Most of these pathogens only stay for 2 or 3 years in high amounts in the soil. This means that you should practice a 4-year crop rotation plan. By the time beans grow on the same plot of soil again, levels of bacteria will have dropped to very low levels. They won’t be able to devastate your crops entirely.

However, it’s nearly impossible to eradicate them completely just by rotating the plants over 4 years. There will always be a few bacteria that will reappear. Nonetheless, they won’t be numerous enough to cause any real damage.

Crop rotation is, by far, the most natural solution to prevent bean leaf blight: no additives and no extra work! All you have to do is avoid planting beans in the same spot, and infection drops to acceptable levels.

These bacteria and oomycete spread thanks to water. Keeping leaves dry is an excellent way to help protect the plants.

How to grow beans in 3 minutes
Beans are delicious when freshly harvested from the garden, and with this snappy happy video you'll have your beans growing…
Bean health benefits and therapeutic value
Beans (Phaseolus vulgaris) are native to Central America and South America and are among the oldest cultivated plants in the world.…
Beans, all the tips on how to grow them
Beans, which come in many varieties, are very easy vegetables to grow. Basic Bean facts Name – Phaseolus vulgaris Family…