“Climate change”. Hard to have a day go by when this phrase isn’t heard in a conversation. And, like it or not, seasons are changing: frost dates are shifting, winters get milder, summer heat waves strike stronger, drought becomes a thing where it previously never was…

Even people labeled “climate change deniers” acknowledge that weather patterns aren’t constant everywhere. If we feel inconvenienced by an unexpected bout of heat or dry air, it’s even more the case for plants, especially in summer. Water as a resource is getting rarer and constant water-saving regulations force us to adapt. That’s why we worked on a list of 23 vegetables that resist drought, so you don’t have to forgo your vegetable patch even as you comply with stringent water quotas.

Important note before we start: even though these veggies are drought-resistant, they still do need water (just less of it). A particularly hot, dry summer might still kill your crops if not watered at least a little. Lastly, a key fact to know is that the soil type has a very big influence, too. For instance, a soil that has lots of organic matter, humus or manure will retain water much better than poor soil would.

Selection of vegetables that can cope with drought

Typically, leaf vegetables always require the most water. However, a few species still do quite well during dry summers. Let’s list several out here:

Just a few decades ago, these provided the bulk of our diets. This plant category has many species that are great drought-proof vegetables. Of course, first among these is the potato, but there are more:

These actually become more productive when drought looms. Even if the weather is very dry, it’s almost useless to water them. The more resilient among these are:

Not as numerous and somewhat superfluous in the kitchen, edible bulbs also cope well with drought. They don’t need any watering to grow properly, either. Short list, to name but a few:

Grown and selected in ages where irrigation, fertilizers, and pesticides weren’t mainstream, these vegetable patch varieties grew to resist all of nature’s woes on their own. This includes drought resistance and plant diseases as well. Over time, these traits were stored in their genetic material. Growing such vegetables is easier.

Keep your own seeds

To produce drought-resistant vegetable seeds, it’s possible to mark your own plants that resist lack of water best. Don’t harvest these entirely, let some fruits mature and recover their seeds. Year after year, the offspring of these plants will increasingly grow strong even without any watering at all.

Mulch as much as you can 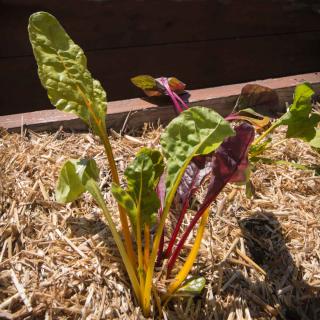 As the saying goes, “a run of the hoe saves two of the pail”… Well, mulch does a great job, too, and it’ll save a lot of water.

Indeed, a layer of mulch that’s thick enough – at least 2 inches or 5 cm – considerably reduces evaporation and locks moisture into the soil.

Credits for images shared to Nature & Garden (all edits by Gaspard Lorthiois):
Red is for drought by ArtTower under Pixabay license
Sprouts hold in the sun by Annette under Pixabay license
Straw mulch / Lance Cheung by U.S. Department of Agriculture under Public Domain
Meet the community
Need advice? Share your garden joys & woes!

Best types of fermented weed tea – find the one to suit your needs
Weed tea, prepared by simply fermenting weeds in a pail, is excellent to treat plants against diseases. Here are the…
Brussels sprouts, a touch of green in winter
Winter is a season often associated with cabbages and cauliflowers... why not make the most of the season and add…
Companion planting in the vegetable patch
Just like humans, vegetables also have friends and foes. Some families stimulate or protect each other. Other families tire each…