Home » Gardening » The Vegetable Patch » Artichoke, how to grow it

Even if this might come as a surprise to many, the growing of artichoke is relatively simple to pull through.

Harvest – from May to August

Whether you start from seed, from young plants, or from rooted shoots, you’ll see how easy it is to grow superb green or purple artichokes.

How to sow and grow artichoke

Artichoke can be grown from seed or by transplanting rooted shoots. Although planting from rooted shoots is the most common technique, it is interesting to try sowing from seed.

This might come as a surprise, but sowing artichoke from seed is very easy.

Artichoke is cultivated from rooted shoots collected from older plants, these are small runners that sprout from the base.

Rooted shoots are planted in spring or fall depending on when the harvest is planned for and on the climate in your area.

Keep a distance of at least 3 feet (1 meter) from one plant to the next to give them space to grow. 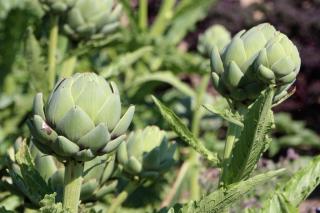 Artichoke is a plant that can survive for several years in the same spot, as long as it is well protected against freezing in case of frost spells.

The hardiness to freezing of artichoke goes down to 23°F (-5°C).

There are more details below, in the “Artichoke in winter” section.

Artichoke needs water, and quite a lot of it, but they also dislike excessively wet soil, especially when water stagnates and the roots start rotting.

Diseases and parasites that attack artichoke

Artichoke is a vegetable that is rather easy to grow, even though it is vulnerable to several diseases and parasites such as downy mildew, powdery mildew, caterpillars, aphids and ramularia.

We recommend treating at the beginning of the growth phase with a fungicide (bordeaux mixture) to avoid downy mildew and renew the spraying after wet rainy days.

Also take note that artichoke is a favored shelter for caterpillars and snails and setting traps for these could be smart, because damage can be extensive.

As for the other diseases, there are ways to naturally treat against powdery mildew, blight, caterpillars and black aphids.

Cut the heads together with about 6 inches (15 cm) of the stem when you feel they’ve grown large enough.

Before the first frost spells, it is best to protect your artichoke well from the harshness of winter.

What to do with artichoke after winter

All there is to know about the artichoke 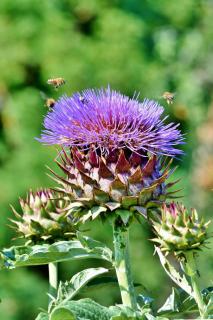 There are 2 kinds of artichoke, the green one and the violet one, from which the heads are eaten.

Either cooked or raw, they are often dressed with a simple oil and vinegar dressing, but there are many unique and delicious recipes.

Artichoke is a vegetable that has a high vitamin C content, and it is an excellent liver stimulant.

It is recommended to amend the soil with compost before the planting and to loosen up the soil well.

Erigeron, a very easy perennial
Erigeron is a very cute little plant which is a hot trend nowadays. Essential Erigeron facts Name – Erigeron or…
Osteospermum – astounding daisies galore in the garden
Osteospermum is a magnificent perennial with flowers that are just as remarkable. A summary of Osteospermum facts Name – Osteospermum Family –…
Italian Everlasting (Helichrysum), the curry plant
The Italian everlasting (Helichrysum) is a sub-shrub and also an herb, which is very interesting also for its cute little…