Powdery mildew is a fungus that belongs to the Erysiphaceae family and frequently colonizes certain plants.

This mold appears in the form of a light velvety white layer or white spots on leaves, which is what makes it immediately recognizable.

It usually appears in Spring, in April or May, when temperatures rise and the soil and air are still full of moisture from the wet months of March and April.

It also makes a comeback at the beginning of fall, when nights grow longer and moisture once again increases.

How to treat powdery mildew

Powdery mildew should be treated both through preventive and curative actions.

These actions will keep powdery mildew from appearing, or at least delay its spread.

Once powdery mildew has appeared, it’s possible to contain and stop it.

Powdery mildew agents are usually specific to the plant they infect: powdery mildew on grape vines will not contaminate your rose trees.

There are even herb spices that can contract powdery mildew: 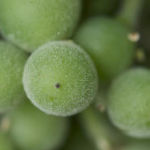 This picture shows powdery mildew on grape leaves and fruits.

Credits for images shared to Nature & Garden (all edits by Gaspard Lorthiois):
Symptoms of this fungus by Scot Nelson under Public Domain
Meet the community
Need advice? Share your garden joys & woes!
Live from the forum
Goji berry was healthy but now is covered with white sickness

Aphids, how to get rid of them?
Aphids are fearsome insects that attack leaves and feed on plant sap. There are natural ways to treat against them.…
Remove moss from the lawn
When moss appears on a lawn or in the grass, it often can be traced to one or two simple…
Caterpillars, techniques and organic treatments to avoid them
Caterpillars are butterfly larvae that come in many different shapes, colors and sizes, but the damage they do is always…