Growing leek from seed to harvest is fairly straightforward and will satisfy you in many ways.

Here is our advice on how to grow leek well.
Read also:

The sowing season for leek extends more or less from mid-January to mid-September.

Sowing can start relatively early in the season, as long as there is a protected space that is relatively warm (above 60°F, or 15°C) like a greenhouse or an indoor space fitted with heating.

It is of no use to sow leek in the ground directly until soil temperatures reach at least 54°F (12°C).

1- Harvesting leek in the spring 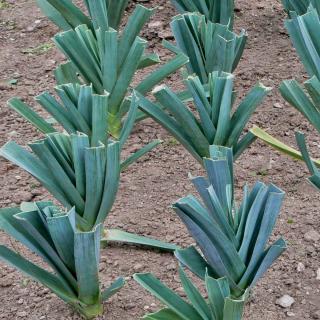 To harvest leek in the spring, you must have sown the leek at the end of summer or during fall of the preceding year.

2- Harvesting leek in the summer

To harvest leek early in the season, it is necessary to sow seeds during the winter.

3- Harvesting leek in the fall

This is the ideal season to grow leek because temperatures allow for normal, outdoor cultivation.

Growing leek is very easy, and here is how to ensure a bountiful harvest and avoid diseases. 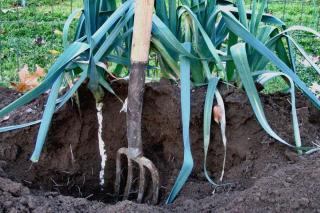 In order to whiten the base of the leek, it is important to ridge leek stems regularly. This is also called blanching. This is an important step in growing leek because only the underground portion will become the white part of the stem.

A video on growing leek

Diseases and parasites that attack leek

Leek is vulnerable to certain diseases, and preventive treatment is recommended; but best is to space the stems well to avoid fungus altogether.

Run the hoe along the ground to remove weeds and let rainwater seep into the ground easily.

Leek responds more or less well to the presence of other vegetables in the patch. Here are the good companion plants followed by the ones leek is incompatible with.

In the vegetable patch, it is important to match plants correctly to ensure that companion plants are located near each other.

Certain plants would compete with leek and it is best to plant them apart to avoid them hindering each other.
Bean, silverbeet, cabbage or pea.

Cooking is a very different story altogether, and combining these vegetables together can be very savory.

Vegetables to plant after harvesting leek

For good crop rotation, in order to maintain good levels of nutrients in the soil, here are the vegetables that are suited to planting after leek:

Species and varieties of leek 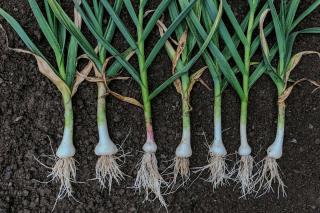 Some varieties of leek are very interesting:

You will perhaps find solace in the following varieties as well:

Most leek varieties are very hardy and will let you harvest this vegetable all winter long, straight from garden to table. 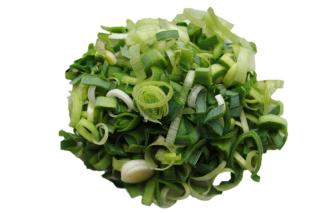 Its origin stems from the Mediterranean sea, and leek is cultivated today almost all over the world.

Very much savored for its taste and nutritional value, leek is also well recognized for its many health benefits and therapeutic values.

It is replete with vitamins C, E, fibers and pro-vitamin A, and leek helps the digestive tracts function correctly and keeps many illnesses at bay.

Leek can be eaten both raw and cooked, but most leek-based recipes involve cooking it.

Since it has a high fiber content, leek is excellent to ease digestion and also delivers many needed vitamins!

Credits for images shared to Nature & Garden (all edits by Gaspard Lorthiois):
Rows of leek by Ria under Pixabay license
Leek with no leaf tips by cianc under © CC BY 2.0
Ridge depth on a leek by Josh Graciano under © CC BY-SA 2.0
Leek harvest by woodleywonderworks under © CC BY 2.0
Chopped up leek by Ralph Klein under Pixabay license
Leek in a field (also on social media) by Rosalyn & Gaspard Lorthiois, own work
Meet the community
Need advice? Share your garden joys & woes!