Home » Gardening » Herbs and spices » Rosemary, beautiful in the garden, useful in the kitchen

Rosemary is both a beautiful shrub and a formidable herb plant.

Care and pruning are small actions that will increase the proper development of the herb shrub.

Planting rosemary in spring or in fall is best, preferably in light and well-draining soil.

Rosemary is a Mediterranean plant that adapts well to most climates and situations (with the exception of high-altitude mountain ranges), and which is more vulnerable to excess moisture or lack of sun than it is to the cold itself.

Rosemary can deal with salty air, but not strong sea winds. 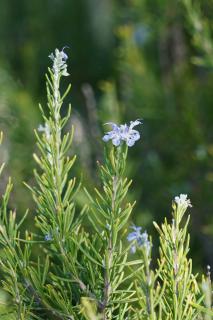 Sowing is rather lengthy and the best propagation technique is cuttings or layering.

Simply snip a four to six-inch branch tip and place it in a glass of water on your kitchen windowsill. Change the water every three-four days. When roots have sprouted that are half an inch long, transfer to a pot with moist soil.

For the sowing, you must sow directly in place in spring, but it is sometimes quicker and easier for the amateur gardener to plant young shoots purchased in stores.

You can collect seeds from rosemary, they’ll likely sprout well, especially if there are many pollinators in your garden.

Care and trimming of rosemary 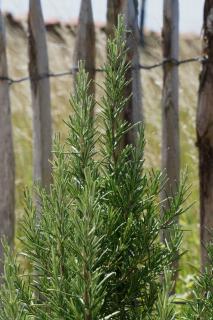 Rosemary is a very easy shrub to grow that requires almost no care at all. Try to weed around the foot of the rosemary bush, to avoid unsightly weeds.

In the coldest regions, cover its foot with a thick layer of dried leaves to protect it against the cold.

Water regularly the first year after planting if the weather is hot and it isn’t raining.

Once the first year has passed, this shrub can take any drought in stride.

You can cut stems off whenever you need some all year round.

It is preferable to cut from recent growth to stimulate new shoots and make the rosemary branch out.

Remove dead branches at the beginning of spring.

Don’t prune on dead wood, because rosemary won’t grow back on these older parts. 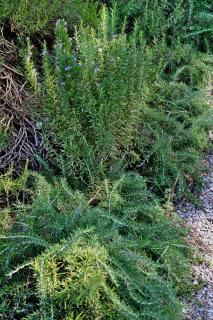 Native to the Mediterranean area where it grows in the wild, rosemary is very fragrant. As a herb, it is particularly well suited to seasoning grilled meat and fish.

It is a very hardy cultivated shrub that resists very well to temperatures below freezing and diseases, too.

There are several varieties. One of the more surprising ones is the creeping rosemary. It sends snaking branches along the ground, rarely growing any taller than a foot (30 cm).

As its scientific name mentions, “officinalis“, rosemary has medicinal properties that favor digestion and stimulate the body.

It is often used to prepare bouquet garni.

Since rosemary is part of these, it won’t be difficult for you to create your own bouquet garni yourself if you plant these few herbs.

Apart from rosemary, the most common bouquet garni components are:

As such, any recipe that calls for one of these can usually be made tastier with a touch of rosemary. A great example of this is delicious ham and leek quiche, a pie that’s simple, tasty, and very easy to bake.

No need to water, rosemary will do just fine in poor, dry soil. It will do very well with its companion plant thyme. They share whatever light, nutrients and water without competing.

Marjoram, garden oregano
Marjoram is a delicate strong-tasting herb, very fragrant and easy to grow. It is perfect to flavor meals. Main Marjoram…
Bouquet Garni, the perfect way to flavor meals
Preparing your own bouquet garni is something enjoyable and very simple. A bouquet garni is an assortment of herbs and…
Herbs and spices, everything there is to know about them
Herbs and spices are a perfect match for those who love both gardening and cooking. It is truly enjoyable to…