French lavender is rarer than common lavender. Its flowers are very original.

French lavender is a name given to two different but similar plants of the lavender family. Both are easy-going and very productive, and care is nearly identical. French lavender will decorate your gardens and terraces magnificently for a long time!

In the United Kingdom, you’re dealing with Lavandula stoechas (often called Spanish lavender in other places).

In the United States, Australia, New Zealand, the species called French lavender is Lavandula dentata… which the French themselves call English lavender (“Lavande anglaise” in French)! 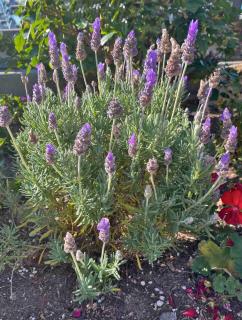 Prepare a place that is well endowed with sunlight with well drained soil. If your soil is clay, mix sand into it to make it lighter. 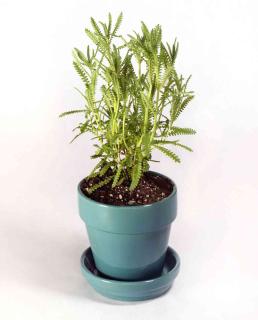 One important tip to grow French lavender in pots: avoid soil moisture at all costs.

Usually, young French lavender plants require repotting the moment you’ve purchased them: nurseries prefer selling just before another costly repotting. Repot to a container only 2 inches (5 cm) wider for that first season. Afterwards, either upsize the pot incrementally, or plant it directly in a pot that is the ideal size: 1 to 1½ feet across (30 to 40 cm).

At that point, simply replenishing nutrients with fertilizer such as fermented weed tea is enough.

Lavender excels at resisting drought.There are only three cases when you must water your French lavender:

Expert perfume makers say that the dryer the season, the more fragrant the perfume!

Pruning and caring for French lavender

Pruning French lavender is possible, but must be exclusively performed on twigs that still bear leaves. If you prune dry wood, it won’t grow back… 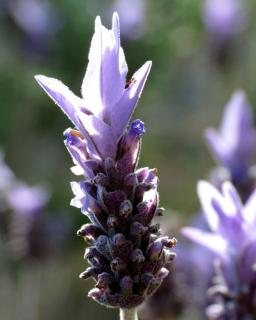 French lavender can keep for months, even years, if kept in a dry place sheltered from the sun’s rays.

There aren’t many. Actually, this flower often helps as a pest repellent. Like marigolds, it repels aphids.

In cases where the plant is severely weakened due to extreme drought or overwatering, the shrub may develop diseases such as leaf spot  (Septoria).

Although butterflies love to drink its nectar, you won’t find any caterpillars on the leaves, none like to eat it!

All there is to know about French lavender

French lavender got its name from the country where it was developed and grown intensively to extract its oils for perfume. In France, a common name for it is “butterfly lavender” (lavande papillon) because the flowers tips look like butterflies.

Flowers are stouter that those of common lavender, and like its cousin, both types of French lavender have been grown for thousands of years. Traditional uses were for bathing, scent, and medicinal benefits.

A very cute plant, this sub-shrub is one of the symbols of Provence, of the Mediterranean sun and typical fragrance.

A great purveyor of nectar, French lavender attracts honeybees to the garden, where they join in on the fauna and flora ecosystem.