Cabbage moth (Pieris brassicae) is a large white butterfly species that naturally reproduces in cabbage leaves. It uses those leaves as food for caterpillars of the next generation. Wings have a few black spots on them.

Cabbage moth can completely destroy a harvest in the vegetable patch.

Start suspecting cabbage moth if you notice a white butterfly a little over an inch large (3 cm). This pest finds refuge in most types of Brassica plants, in particular the various cabbage species, but you’ll find it on occasion on other host plants such as nasturtium. The key marker of cabbage moth is, of course, its white color.

In the United States, this caterpillar is called large white, whereas in the United Kingdom it goes by the name cabbage white or cabbage moth. Actually, it isn’t a moth at all, but a type of butterfly! 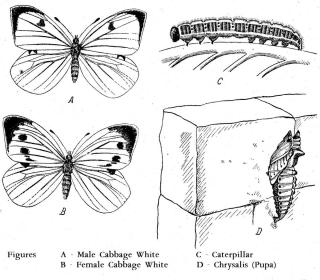 Cabbage moth appears at various times over the year. Some years it appears in Spring, in other years you might notice them only in Summer or Fall. During Winter, cabbage moth hibernate in hidden places in the form of a pupa or chrysalis. Usually, the first wave of cabbage butterflies emerges in Spring. The white butterflies flutter to the undersides of cabbage leaves to lay eggs there. Once they hatch, tiny caterpillars start colonizing the plants, damaging them as they feed. Indeed, these caterpillars find cabbage leaves particularly appealing! Holes appear on the cabbage leaves. Cabbage moth can annihilate an entire harvest in a single season. The explanation behind this is that 3 cabbage moth generations fit during the growing season: the first in Spring, the second over the Summer, and the last one in Fall.

Female large whites seek out plants with dense leafage, and it’s even better when many plants are close together. A cabbage patch is ideal! It lays between 40 and 100 eggs in a neat pattern. Having so many caterpillars hatch together isn’t much of a problem for it since it specifically a place that has abundant food. The cousin of Pieris brassicae, Pieris rapae, has an opposite strategy: a single egg per plant. That way, even measly, scraggly plants can also serve as host plants. 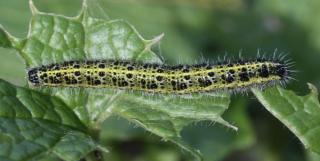 Damage is variable, and essentially depends on how many caterpillars are chowing down on your cabbage plants. If you’re lucky, you’ll only have a few ugly but harmless holes in leaves, which won’t impact the harvest. However, an infestation of caterpillars can destroy all cabbage growth. That’s why it’s better to work on preventive measures, since you’ll have less work and damage later on.

There are quite a few organic cabbage moth treatments. It’s perfectly possible to treat against Pieris brassicae without using a single drop of toxic products.

Firstly, it’s common to try to protect your cabbage against this moth with a protective net. This is a solution that is only effective if you’re certain that no hibernating larvae are hiding, dormant, in the soil. If there were, a net wouldn’t help at all, since they’d already be inside!

Many plants repel cabbage moth: absinthe, lemon balm, mint, cosmos, sage, tomato, and also thyme herb, too. Planting these is really the best way to increase biodiversity in the garden, which, as a side effect, also helps produce different crops simultaneously!

You might be familiar with nasturtium. They’re often used as a decoy that attracts aphids. It’s the opposite of a repellent: it attracts pests away from other plants! This also works with cabbage moth: caterpillars will feast on nasturtium instead of cabbage. 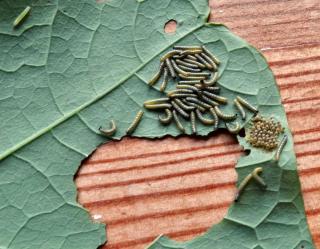 As soon as you notice them, slice and scrape any eggs off the leaves with a knife. This certainly is a heavy chore if the infestation is severe, but it’s the only way to guarantee 100% healthy cabbages.

If ever caterpillars have started seriously damaging your heads of cabbage, the only option left is to spray them with Bacillus thuringiensis, which is an organic insecticide available in every garden store. Spray the product about 8 inches (20 cm) from the leaves, and spray again, if needed, a few days later. Natural options are also available. We strongly recommend a decoction prepared from chamomile, tansy, absinthe and common vervain.

Large white, as an adult, feeds on a great many types of flowers. Interestingly, once an adult has tried a few types of flowers, it will usually only search those out for the rest of its life, even though it would be able to feed on many others.

For laying eggs, though, fewer plant species serve as hosts for this cabbage caterpillar – but these include a great many veggies! Sometimes the female will lay on the “wrong” plant, and the caterpillars will need to reach a new plant. Indeed, sometimes specific nutrients are missing that make it impossible for the caterpillar to transform into the adult butterfly form.