The Boxwood tree moth, Cydalima perspectalis, is an insect of the Crambidae family in the Lepidoptera order.

It is native to Asia, but has now invaded Europe. It has been spreading in France since 2008.

It is a caterpillar that only eats boxwood tree leaves for food, and completely consumes entire swaths of the tree, leading to its demise.

The green caterpillar has a black head and dark green stripes. There are also black dots.

Boxwood tree moth caterpillars do not cause itches or rashes. They are absolutely harmless to humans, and can be handled without any special gear. 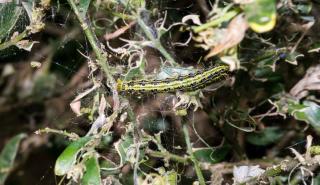 You will find distinctive tiny webs, similar to spider webs, which are typical of boxwood tree moths.

These caterpillars then turn into brown and white-colored moths that fly around boxwood trees at dusk and at night.

If you have detected green caterpillars on your boxwood, warn any neighbors who might have boxwood trees, because they will certainly be contaminated soon. The earlier this problem is dealt with, the higher the chances of eradicating this parasite.

The first thing to do when you spot these green caterpillars in your boxwood trees is to manually pick them off.

This is often not enough, and organic treatments are available to fight these insects, too.

Take note that after the first spraying, you will already be rewarded with a better situation and new leaves sprouting, but the problem is not solved yet.

These don’t boast any advantage over the Bacillus thuringiensis treatment that we signaled above, which has the advantage of being qualified for use in organic gardens.

These chemical agents actually have the disadvantage of striking down other insect species, many of which participate in local garden or terrace ecosystems.

Chemical products generally have a negative impact on bees and other key beneficial insects in nature.

A French company (Biotop) identified Trichotop buxus, a microscopic wasp that preys on boxwood tree moths. This predator must be introduced on the invading boxwood moth at its larval stage, during the moth’s reproductive stage.

This solution has proven effective on small areas, and work continues to prepare large-scale use in the near future.

Renewing the treatment at the end of the winter or at the beginning of spring in the following year will ensure that any remaining larvae that have overwintered in your boxwood trees will be dealt with.

Butterfly bush, fluttering and buzzing all around fabulous flowers
Butterfly bush key facts : Botanical names: Buddleja, Buddleia Common names – Butterfly bush, butterfly tree, summer lilac Family – Scrophulariaceae…
Fruit flies, how to fight them
Very small flies score the fruits with their ovipositor to deposit their eggs inside. These eggs will hatch inside the…
Cauliflower, everything there is to know about growing it
Cauliflower is a vegetable that has low calorie levels and high fiber, calcium and magnesium content. Cauliflower facts Name – Brassica…