A voluminous body, a louder-than-usual buzz, and colorful fuzz all around – the bumblebee is easy to identify! A particularly active beneficial insect in the garden, it is a diligent pollinator that runs in the same class as the common honeybee: the heavyweight class!

In the vegetable patch, growers of tomato plants find it extremely helpful, since its physical characteristics render special services to the famous red-fruited veggie-fruit.

Key facts about the bumblebee

This insect is part of the Hymenoptera family. It’s easy to identify: 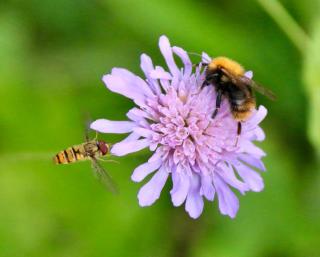 The bumblebee is a gregarious insect, and it feeds on both nectar and pollen. It’s not the same species as the honeybee at all. It lives in small communities of a few dozen individuals. The population of a cluster can even climb to several hundred insects. With a short lifespan, the bumblebee only lives for a few months. Its goal is to harvest nectar and pollen and help the swarm live on.

The nest has a queen, worker bumblebees, male drones and fertile females. These females are the only ones to survive once Winter comes along. They hibernate as temperatures drop, waiting for more auspicious weather. That’s the time when they’ll be fulfilling their destiny: creating their own nest.

The bumblebee can modify the electrical field of flowers it visits. This helps inform other bumblebees that there’s no need to visit it again. A great way to maximize their time harvesting pollen! (Source: Science & Vie n°1148, avril 2013)

When the time has come for queens to establish their nest, they pick very different and surprising locations:

For hibernation, the young, fertilized females take refuge under moss, dead leaves, in a hole in a branch or wall.

Benefits of having bumblebees in the garden

Just like the mason and the common honeybee, the bumblebee is a tireless pollinator. Its main assets, compared to its bee cousins, are its size and the strength of its wings. 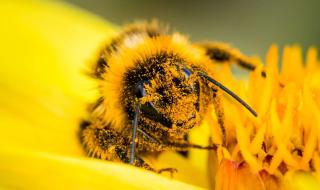 Together with its long tongue, these specific advantages help it visit hard-to-reach flowers that other insects can’t reach: flowers of the pea, bean, tomato, eggplant and pepper family.

The other point of interest is that bumblebees can work even while other pollinators stay dormant. Indeed, its thick fuzz protects it from the cold, which helps it start hopping from one flower to the next much earlier in the season and every morning, too. When the air is cool just after a spring rain shower, the bumblebee is often the first to set out again to fetch the pollen of freshly opened flowers.

How to attract the bumblebee to the garden and protect it?

This formidable beneficial insect just checks what’s available, and, if suitable, builds a nest there. There’s no need to set up shelter for it. However, you can let a portion of your garden or vegetable patch grow wild. It’ll prefer that to settle down and feed as it wishes.

Lastly, to make the bumblebee’s (short) life easier, you can just try to provide it with enough food from diversified sources. For that, sow or plant early-blooming plants such as willow or hazel for instance. These will furnish much-needed pollen and food to young queens emerging from hibernation.

Even though it will pollinate any flower it comes by, the bumblebee is particularly attracted to certain flowers like:

Even though it has a stinger, the bumblebee isn’t very aggressive and it’ll only seldom sting.

Earwig, fearful pinchers we can rejoice about!
A long, thin body with terrifying plier-like pinchers at the tip, anybody will instantly recognize an earwig when it crawls…
Beneficial insects that lend us gardeners a hand
These feed on pests, help plants reproduce, and give the soil better structure. Beneficial insects really give us a real…
Hoverfly: looks like a wasp, flies like a hummingbird, works like a bee!
The hoverfly: even if the name doesn't ring a bell, you've probably seen them before and wondered what kind of…