Gall wasp is an insect that lays eggs in soft tissues in trees, flowers and other plants. As the larvae develop, a gall forms and usually hinders the proper development of the plant.

Usually, a single given insect will only contaminate a single plant species, or at most only members of the same plant family. In severe cases, the harvest is compromised and the plant may die.

There are different kinds of gall wasp, and their impact on host species also differs, but there is one symptom that all have in common: formation of a gall or several of them.

What is gall wasp

A gall wasp is a flying insect of the same family as the common wasp. It has the particularity of requiring a specific host plant as part of its reproductive cycle.

How does a gall wasp infect plants

Usually, a gall becomes visible to the eye around 1 to 6 weeks after the eggs were laid.

Every day, botanists and entomologists discover new species. Only a fraction of all possible gall wasp and host plant relationships are know and described so far.

In gardens throughout the world, all types and families of plants have been known to support at least one or more gall wasps.

How to control gall wasp 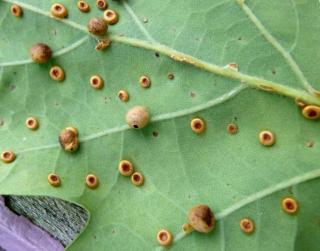 When natural predators aren’t common, manual removal is also very effective. Pruning off the gall-infected branches and leaves and then burning them works best when the timing is right: the new generation of wasps should not have emerged yet.

Over 1400 species of gall wasps have been identified and catalogued to date. This doesn’t include other types of galls, such as those due to fungus or mites.

Each wasp is usually specific to a single host plant species. This is because the chemical cocktail required to trigger gall formation is unique to each plant species.

In the course of time, each parasite wasp evolved to produce exactly the mix that would trigger the “ideal” gall for it. This would afford the hatched pupa protection, food and safety from predators.

Some gall wasp species only lay eggs where other gall wasps have laid them, in the gall. They then benefit from the gall without having had to trigger it. These are called inquiline gall wasp. Usually  they out-compete the original gall wasp for nutrients, much like a cuckoo replaces its siblings in the host bird nest.

Can a gall wasp sting?

Gall wasps won’t sting persons or animals. Their sting isn’t designed for attack, it’s actually simply a tube that lays eggs. It can pierce through woody tissue but the wasp won’t use it to defend itself. 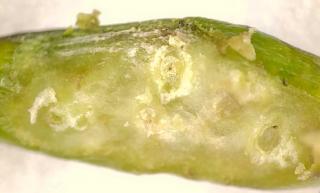 These are so tiny, bring a magnifying glass out when you are on the lookout for them!

Indeed, the largest are only a few millimeters long (¼ inch). Another fitting name for them is “gallfly” or “gallflies”.

A sharp blade can slice open galls, revealing parasites inside.

More about plant diseases and pests