Always a hassle around the picnic basket, sometimes even a painful sting, the wasp doesn’t seem to manage positive vibes, does it? But did you know its larva devours incredible amounts of insect pests that would otherwise damage our plants? So, unbelievably, the wasp is a beneficial insect in the garden, a big help that doesn’t necessarily deserve all the bad press.

Key facts about the wasp

The term “wasp” actually includes different types of insects. Indeed, the main species of wasp are:

Half an inch long (1 to 2 cm), it has a black and yellow-colored abdomen. Only an extremely thin joint connects the abdomen with the thorax. Its nest is a beige color.

It looks very similar to the common wasp, and it’s difficult to tell the two species apart. One way to do so is to look at the patterns on the abdomen. A much clearer indication is the nest. If you have the chance of seeing one, you’ll notice that its definitely a grayish color for Vespula germanica.

Identical in length to its cousins, umbrella wasps differ from the previous two in that its silhouette seems thinner and the abdomen is sharper at both ends. 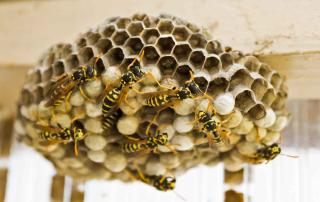 The social wasp lives in a community that can number up to 7,000 insects at its prime. Among them, only the fertilized females will survive the winter. In Spring, they look for an appropriate shelter to build their nest:

Adults feed on nectar and other sweet liquids. Larvae, on the other hand, devour great numbers of insects.

Benefits of wasps for the gardener 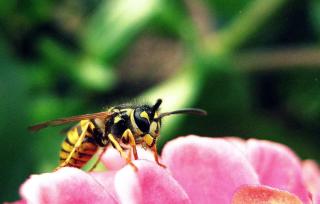 The wasp’s larvae are what is most interesting for the garden. Indeed, their voracious appetite requires a continuous influx of all sorts of prey: flies, caterpillars, aphids, etc.

They thus are excellent protector insects for your plants and harvests, especially in the immediate vicinity of the nest.

Living with wasps in the garden

More often than not, the wasp has a bad reputation and people tend to avoid and even destroy it instead of attracting it. Nonetheless, it’s possible to cohabitate with the wasp, particularly when the nest is located high up in a disaffected portion of the garden. If the nest is high up, wasps won’t feel disturbed by our back and forths.

Trapping wasps with a sweet liquid isn’t a good solution. This is because it’s a wide-ranging trap that is non-selective. Many insects other than wasps are trapped, most of the innocent beneficial insects. It also won’t impact the wasp’s nest because there are so many individuals that picking off a few won’t change much. If you nonetheless want to try such a trap out, replace the sweet syrup with water and a few drops of dishwashing soap, and add something a bit meaty: a bit of cat or dog food, ham… Wasps find meat even more attractive than sugar and other insects don’t.

Lastly, if ever you must remove the nest for safety reasons, call up a professional. Don’t try to do it yourself.

A few misconceptions and myths about the wasp need to be debunked.

Can a wasp sting?

Yes. Usually, it stings because it wants to defend its nest or because it feels under attack.

What to do if a wasp stings?

A few things can be done right in the garden:

No. Even though it collects flower nectar for food, wasps don’t make honey.

Difference between a wasp and a bee?

Getting these two confused is quite common. There are a few big differences between the two:

Biodiversity in permaculture for a self-sustaining garden
In permaculture, nature does all the work! For a permaculture garden to be sustainable, self-sufficient and properly balanced, it's important…
11 plant-me-now melliferous shrubs for pollinators
As appealing to us as they are to pollinators, melliferous plant species are where pollinator insects reign as kings. These…
Bumblebee, bumbling along and heavyweight pollinator
A voluminous body, a louder-than-usual buzz, and colorful fuzz all around – the bumblebee is easy to identify! A particularly…