With striking designer-like leaves, cute and ornamental with its colorful rosettes, houseleek (or Sempervivum) belongs to the much sought-after category of plants that require neither care nor water. Amazing, isn’t it?

“Sempervivum” means immortal. It’s a small succulent plant, a perennial that grows on rocks, atop walls, and in arid deserts… 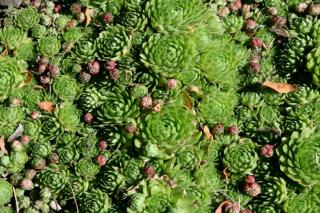 A hardy plant native to the mountain ranges of Europe, it feels at home in light, poor soil. Whether it’s sandy or chalky doesn’t matter, as long as it gets full sun and heat. A note of caution: you’ll have to “harden” your plant out somewhat before setting it in full sun if all it’s ever had was indoor growing, or it’ll get sunburned.

Houseleek is more than just a filler plant to populate areas where nothing else will grow, its an opportunity to create a plant landscape that knows no restrictions! It only needs minimal water. Even the occasional puddle might lead to a rotten death! Optimal, perfect drainage is it’s only requirement.

To propagate it, simply plop a rosette with a root on a rock with a handful of dirt, and it’ll find ways to hang on.

Over 4,000 species of houseleek

In a pot that drains well (with a hole underneath), it isn’t very difficult to recreate the perfect growing substrate: mix regular dirt or soil to an equal part of large gravel (or pozzolana, or sand), that’s it!

What will probably take you longest is choosing the container: vintage? design? sentimental? It should highlight the plant well. Create a composition of houseleek together with sedum, since they both thrive in exactly the same environment.
From the more than 4000 species that exist, a majority will have either red or pink rosettes of all sizes, but a few stand out with yellow and even chocolatey-purple colors. Spectacular!

The summer blooming will add a touch of pink or yellow color, and often brings welcome verticality in an often flat-growing plant. With a few delicate snips of the pruner, remove the floral scapes after the blooming and before winter. As for winter, no need to worry: houseleek doesn’t fear the cold as long at it’s dry, it can cope with temperatures as low as 5°F (-15°C).

Our fave’ of the moment? The Chick Charms Gold® Nugget 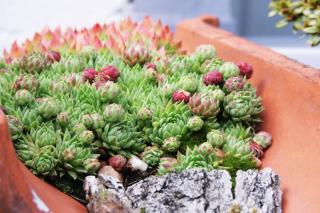 This Fall, adopt a hybrid red houseleek with truly one-of-a-kind flamboyant colors. This newcomer will bring a touch firelight to the garden over the cold season – but its foliage will turn green again in Spring.

The Chick Charms Gold® Nugget is unique in that it shows its colors in Winter, unlike the other more traditional varieties that turn red in Summer. 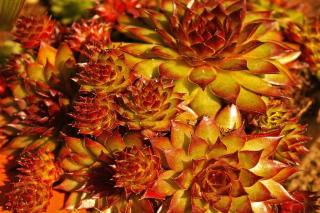 Like all other Sempervivums, it propagates spontaneously through its numerous rosettes. It forms a stunning ground cover, even a bit hypnotic. The Chick Charms® series numbers quite a few other specimens that will surely catch your eye…

Houseleek or Sempervivum, a family of wonderful drought-resistant plants
A notoriously easy succulent to grow, the Sempervivum houseleek family is a pleasure to behold. Houseleek, key facts Botanical name…
Crassula, the family of the famous Jade tree
Crassula is an indoor succulent plant family that displays surprising evergreen leafage. It shows up in more and more places…
Schlumbergera, the Christmas cactus
Schlumbergera, also called Christmas cactus, is a cute succulent plant that blooms in fall or winter. Summary of Schlumbergera facts…