Succulents are attractive for their ease of care, their great diversity and their waxy or velvet-covered leaves. They do great both indoors and outside!

Let’s zoom in and focus on two rosette-shaped Crassulaceae specimens: echeveria and houseleek.

Native to arid deserts the world over, they are easy to grow, since they are used to drought: they can survive without water thanks to their fleshy leaves and stems where they stock moisture. 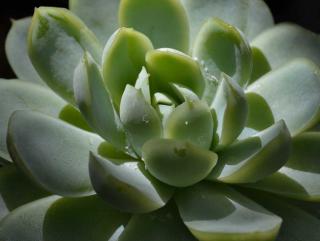 The Crassulaceae family numbers thousands of succulent species, among which the Echeveria, a rosette plant native to Mexico. Resembling artichoke, it presents thick, gray-green, purple or red leaves, and some species put forth small yellow, pink or red flowers.

There are 150 varieties of echeveria, and they all have the same capacity of resisting forgotten watering. They can easily hold for three or four weeks without water.

As a solitaire in a pot or associated with other succulents in a terrarium, echeveria can be set outdoors in summer. To avoid seeing it wither off, repot it at least every three years, in spring.

Also quite similar to artichoke because of its petals placed to form a rosette, houseleek is very present along the entire Mediterranean basin. This succulent belonging to the Crassulaceae family blooms in summer and is extremely resilient to drought and cold. It can be planted outdoors, either directly in the ground or in pots. It revels in chalky or limestone soil but fears excess rain.

Houseleek is an easy plant, you’ll want to set it in well drained soil in a sunny spot, and won’t have much ado with it subsequently. Just try to protect it from excessive rainfall in fall and winter. You can easily propagate it by collecting its runners.

Just like echeveria, houseleek presents us with a great variety of shapes and colors and blooms in summer. It is used as a rock plant on low walls, and was grown in olden days atop roofs to protect them from lightning. Its roots develop deep down so if you plant it in a pot, select a rather tall one.

Meet the community
Need advice? Share your garden joys & woes!
Live from the forum
My succulent isn’t happy, it’s shrinking What is the best soil mix for anthurium? Treating Mealybugs on Echeveria Dondo

Crassula, the family of the famous Jade tree
Crassula is an indoor succulent plant family that displays surprising evergreen leafage. It shows up in more and more places…
Agave, a prickly giant that you can learn to love
With its one-of-a-kind designer-like silhouette, agave helps make your garden seem to come from out of this world. Basic agave…
Kalanchoe, a blooming wonder that never stops growing
Kalanchoe or kalankoe is surely among the most beautiful succulents. Key Kalanchoe facts Name – ‘Blossfeld’ Kalanchoe Family – Crassulaceae Type –…