Do you tend to forget watering your plants? Succulents and Cactus are the solution!

These plants are virtually care-free. Their many shapes and sizes lend a touch of exotic graphic shapes to your home.

Cactus mix, a hodgepodge of shapes

Native to Mexico and to the American Southwest, these little sown cacti with spikes and needles come in a host of surprising shapes. For millions of years, the plants of the Cactaceae family learned to adapt to the extreme dryness of deserts: their needles capture moisture from morning dew and funnel it to the tissues inside for storage.

In your house, though, don’t overwater! You don’t need to water at all in winter. In summer, water from time to time. What’s important is to ensure the soil has dried up completely before watering again. Set up your cactus in a luminous place using a blend of garden soil and sand. Since cacti are used to temperature going up and down, they can live both in hot stuffy rooms and in cold or cool rooms. Arrange several different cacti together, too. You can play around with shapes and sizes in a large pot to capture a bit of that “Tex-Mex” feeling. 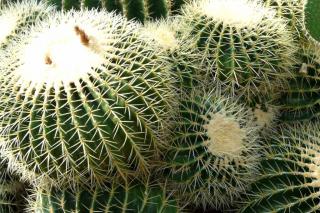 Very easygoing, with minimal need for water and light, this “camel-like” plant knows how to repay those who have shown it patience. Believe it or not, after ten to twelve years, small yellow flowers appear as a crown around the tip! 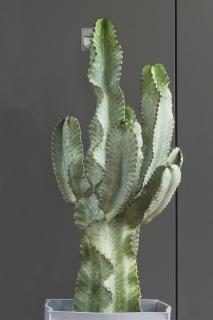 Belonging to the Euphorbiaceae family, Euphorbia ingens hails to us from South Africa.

Its imposing candelabra-like bearing can grow over 6 ½ feet (2 meters) tall when mature.

Such a striking graphic appearance is particularly appealing.

Set it up in a well-lit place, using a well-draining blend of garden soil and sand.

Watch out, though, if you have children: the white sap that leaks from wounds is poisonous. 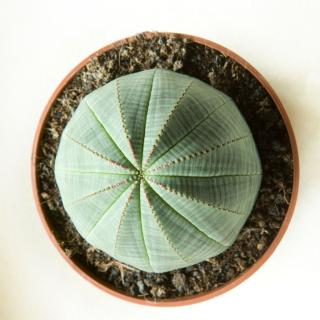 A botanical curiosity is what Euphorbia obesa is. It’s just a round ball with no needles whatsoever. All it has are simple stripes with darker and lighter horizontal bands!

Definitely a contemporary sculpture ideal for clumsy forgetful people because it doesn’t hurt when bumped into and doesn’t require much care.

Place it in a well-lit place, but not in full sun, water regularly in summer, sparingly in winter.

→ Other great cactus for indoors and out: Mammillaria, Barbary fig…

Castorbean
Core Castorbean facts Name – Ricinus communis Family – Euphorbiaceae Type – annual shrub Height – 6 to 13 feet (2 to 4 meters) Exposure – full…
Pilea, a trendy, stylish plant
Pilea peperomioides, also called "Chinese money plant", is a very ornamental plant which is ideal in designer settings. Pilea basics…
Different plants need different mulch
There is a mind-numbing amount of mulches on the market, and it's never simple to find out which one is…