As soon as the word wasp is mentioned, we all shudder at the thought of that insect that somehow always finds ways to turn a nice family picnic into a frenzied gaggle of panicked people! But did you know there were a great many wasp varieties? One of which is particularly interesting: the predator wasp.

As its name shows, this flying insect that’s part of the Hymenoptera order is an accomplished hunter that feeds on many pests. Seize the chance to learn more about this unexpected beneficial garden animal! Read also:

Key facts about the predator wasp

The predator wasp has a different bearing and silhouette depending on the species it belongs to. However, they all have one thing in common: the joining point between the thorax and abdomen is extremely thin. Adult specimens usually measure less than an inch (a few dozen millimeters), and their appearance is often black, tinted with yellow and red.

Just like the mason bee, every predator wasp is a solitary insect that builds its own nest to house its offspring. However, before laying its eggs, each cell is filled with prey that stays dormant thanks to a paralyzing venom. These insects are a store of food for the hatching larva to feed on. At the end, eggs are laid and the cell is closed up. 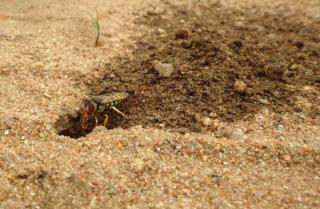 Since the wasp’s lifecycle is very short, it won’t have the chance of seeing its offspring grow. Note that some species don’t even take all these precautions: they simply lay their eggs inside the body of their paralyzed prey. Eggs hatch soon after having been laid, and larva develop at a high rate – a few days for the fastest ones, up to two weeks for those that need the most time. After that, larva enter a dormant phase called diapause and wait for spring to come around again to emerge from their nest.

The wasp’s habitat depends on the species:

Benefits of predator wasps for the gardener

Individual adults feed on nectar, they play a small part as pollinators. Much more relevant are the larvae which are carnivorous, they consume a great many paralyzed insects as they grow. Each wasp species specializes in one or more types of prey. For instance, they might hunt aphids, smooth-skinned caterpillars (bollworm, geometer moth, etc.), larvae, leafhoppers, beetles of all types (like jewel beetles), weevils, spiders… the list is endless!

Even though it’s a formidable predator, such wasps are rarely capable of stopping a sudden invasion of pests and parasites. Luckily, their constant feeding pressure helps control pest populations, minimizing risks of such infestations and benefiting your plants in the most natural way possible.

Attracting predator wasps to your garden 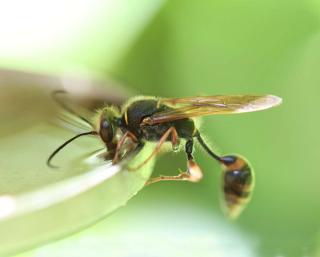 Not much is needed to succeed in attracting predator wasps to your garden. To invite it in and provide shelter, create some “safe spots” for it in your garden and vegetable patch:

Both a pollinator and a pest regulator, the predator wasp shares these two benefits to help us as we work in the garden and vegetable patch.

Bollworms, dreaded caterpillars defoliating vegetables
Typical of many insects (and even more so for butterflies), adult bollworms won't cause any damage in the garden or…
Beeblossom, long-lasting and abundant flowers
Beeblossom, or gaura, is a magnificent perennial plant that makes for easy growing and minimal care. It procures us beautiful…
How to avoid cross pollination
While it's difficult to keep microscopic pollen from flying around, there are a few things that will reduce cross-pollination. Quick…