Home » Gardening » Treating diseases and pests » The ladybug lifecycle, helping us out at every stage

A 10th century legend, over a thousand years ago, relates the story of a man condemned to death for having murdered someone. As he claimed his innocence, a ladybug landed on his neck and the executioner stayed his ax.

Several times, the executioner tried to shoo the bug away, to no avail. The King at the time, Robert the IInd, interpreted this as a sign of God and mercifully released the man. A few days later, the true culprit was apprehended. Since then, the ladybug has been called “the Good Lord’s Beetle”, and is often associated with good luck. 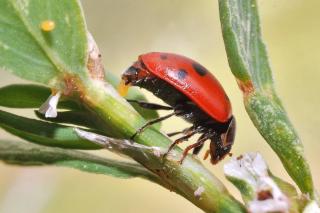 The Ladybug is part of the Coleoptera family. These insects are special in that they have thick elytrons (or forewings) that are like a hardened dome protecting their delicate wings.

Physical characteristics of the ladybug

Did you know…? The saying goes that if ever a ladybug lands on your shoulder, you should make a wish because it brings you luck. Count the dots on its back: that’s how many months your good fortune will follow you. There’s no risk in trying! 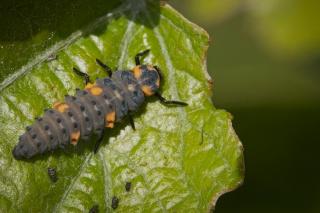 After mating, the female lays between fifty and one hundred orange-colored eggs.

All this takes little more than an hour… a few days later, it will have become bright red.

Benefits of having ladybugs in the yard 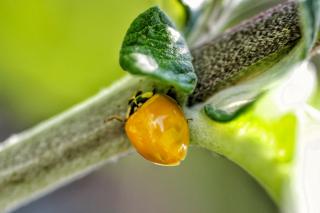 If you’re looking for an alternative to chemical pest treatments, then this is the answer. You should try to attract it to your garden because its main prey is aphids. Aphids are the source of proteins that a ladybug needs to grow.

If ever aphids become rare, it’ll fall back on scale insects, thrips, and whitefly.

Reintroducing ladybugs in your garden 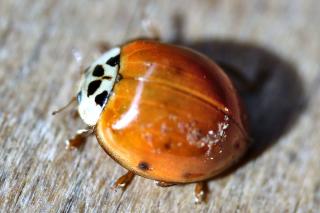 Haven’t seen a ladybug in a long time? It’s possible to purchase larva in horticulture stores. All you need to do is drop them delicately with a soft brush on a spot where there are many aphids (a rose, for instance). Handle them with care, because that sticky goo they excrete when disturbed can sometimes trigger allergies for some persons.

A word of wisdom:

“Thanks are in order, for my roses are whole,

Rid of all aphids, agents of disgrace,

Who bore hole after hole,

Who turn aught into lace.

Set a house up for your insects in your garden to have them stay as guests!

How to increase and ensure cross-pollination
eIt's easy to ensure and increase cross-pollination for your target species. These different tips will help you cross-pollinate plants. Reminder:…
Thrips – miniature heralds of life and death for plants
Thrips are a class of extremely tiny insects – almost microscopic – that either destroy or protect plants. They can…
Whitefly, techniques and organic treatments to avoid them
Whiteflies are tiny insects that can attack all kinds of plants, particularly: hibiscus, geraniums, greater celandine, fuchsia plants and certain…