The Good Lord’s beetle is an incredible bug that feeds on aphids. It is the best of the gardener’s friends. 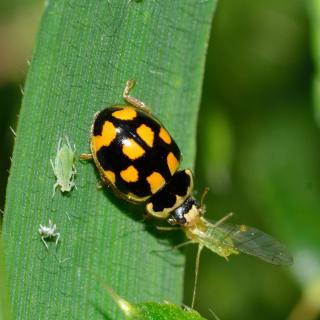 In organic gardening, animals that help you grow things without damaging anything are called “beneficial” animals or insects. Pollinators and predators are some of these. “Predator” is what best describes the 80+ species of ladybugs present in temperate climates. Each is unique, and you can tell them apart thanks to size, color, and dots that form a pattern on their elytra, which is what the wing cases are called. These wing cases are actually the front pair of wings, and the back pair is the pair doing the flying.

The most common ladybug is the one with seven dots. It is very common in vegetable patches and around wild plants. The ladybug with two dots is often found around fruit trees and shrubs. The yellow ladybug with 14 dots appreciates vegetables, whereas the red one with 22 dots is a regular sight around wild flowers like dandelions. Most species feed on aphids, but others indulge in scale insects or mites and ticks. 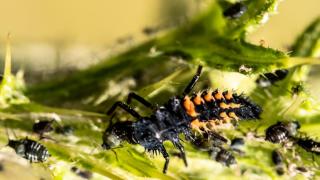 Ladybugs live for one to three years depending on the variety. They reappear in the garden in spring, when temperatures cross the 55°F (12°C) threshold. Winter is when they hibernate, hiding in tree bark, dead leaves, etc. They reproduce and lay eggs from April to May. The eggs – 500 to 1,000 for a single ladybug – are laid on plants in small clusters right among the aphid colonies. After a few days, they hatch to set larvae free. These are voracious eaters, gobbling up to 100 aphids a day apiece! Three weeks later, the larva transforms into a nymph, and metamorphosis leads it to become a yellow ladybug. The wing cases need an additional 24 hours to turn red.

To have ladybugs in your garden, no need to purchase them in your local horticulture store. Simply practice farming without any chemical products, and don’t eliminate all the wild plants that typically attract aphids away from your own cultures. The ladybugs will follow.

The Ladybug, also called “our Lady’s bug”, got the name centuries ago in popular culture. In Europe, during medieval times, the catholic Church broke the cycle of hunger and starvation through the work of many monks in monasteries. They mastered the art of rotating crops, draining inhospitable marshes, and growing food in larger fields. Fields grew larger as entire communities worked together in shared fields.

This had a drawback, though. Monoculture, or growing the same crop on wider surfaces, gave rise to invasions of pests that devoured everything, particularly aphids and the like. In their despair, people called to Mary for help… and ladybugs appeared to control the pests!

Of course, this phenomenon is perfectly natural, but the desire to see God’s hand in the solving of the crisis led to the common name of the providential insect… the Ladybug!

Ladybugs sold in garden stores are usually native to Asia. They tend to turn quite invasive and crowd out local species. Best grow plants that will attract local species from neighboring gardens: flowers like marigold, shrubs like hibiscus and trees such as birch.

Aphids, how to get rid of them?
Aphids are fearsome insects that attack leaves and feed on plant sap. There are natural ways to treat against them.…
Nasturtium vs. Aphids
Whether in the vegetable patch, around fruit trees or near rose trees, Nasturtium plant can be propagated without restrictions. It…
Green lacewing, the genesis of aphid lions
Green lacewing also goes by more dramatic and telling names: golden-eyed fairy, aphid lion, aphid wolf... and each name reveals…