These little striped beetles are definitely a hassle! The Colorado potato beetle devours leaves with terrifying speed! However, there are ways to fight against the potato bug which are fully natural and perfectly safe for the environment.

What is the potato beetle?

The potato beetle (or Colorado potato beetle, more specifically) is a vegetable patch pest that’s part of the beetle family, Coleoptera. Many fear it for its voracious appetite as it eats leaves off plants and destroys entire crops. In most of Europe, it was introduced accidentally and it doesn’t have many natural predators. Eliminating it is crucial whenever possible.

Identifying and recognizing a potato beetle 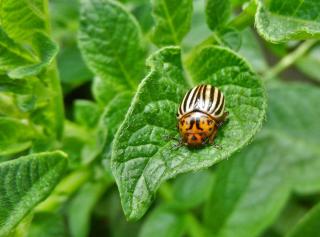 Bright colors are what make the potato beetle easy to recognize. It looks like a large ladybug except that its back is striped with black and yellow stripes. About ½inch to ¾inch long (1 to 2 cm), it has a head, a thorax, and a brown abdomen. These contrasting colors frighten possible predators away, which makes it even more difficult to control. Larvae, on the other hand, aren’t as flashy. They’re humped, brown-orange in color, and have spots along the sides.

The best way to get rid of these pests is get to know how they grow and multiply.

An egg will reach the adult stage within 4 to 6 weeks. Simple math: every year, you’ll have 2 to 3 generations of beetles to deal with! This short, fast-paced lifecycle is what makes the Colorado beetle particularly difficult to eradicate.

Which plants does the potato beetle eat?

The potato beetle loves feeding on Solanaceae leaves. The potato plant is its favorite host! However, you will also certainly see some tomato, bell pepper or eggplant damage as well, this pest will travel all over the veggie patch.

How to fight off potato beetles? 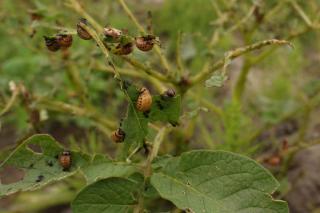 Anticipating problems is the key to organic gardening! There are many ways to prevent problems, and you mightn’t even need to treat many diseases or fight against pests at all.

What if we gardened with the moon?
Gardening with the moon, sure! But how? Gardeners have always observed with fascination the impact of the moon on plants…
Treatment against Otiorhynchus larvae
This little Otiorhynchus larvae, a kind of white worm, is also called "weevil". It sets up its nest in root…
Cuor di bue, the original beefsteak tomato
Cuor di Bue tomato key facts: Botanical name: Solanum lycopersicum Common name: Beefsteak, Cuor di Bue Family: Solanaceae (nightshade family) Type:…