Infecting most ornamental plants such as cypress, willow or fruit trees such as peach trees, apricot trees or cherry trees, canker is a fungal disease that attacks the branches and even trunk of the tree.

Very quickly, branches seem to waste off.
They dry up, die off and often sticky gum flows out of wounds.

Conditions leading to appearance of canker 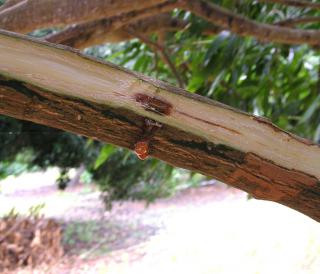 This fungus particularly loves moisture. It will tend to spread when the weather is hotter than usual and moisture due to previous rains is still present.

Whenever the tree is wounded, ensure the wound is as clean as can be. If a saw was used, remove the frayed, jagged line at the bark cut with a sharp knife or billhook. It’s like whittling away the frayed ends to make the cut smooth. If not, healing takes longer and canker will more readily appear.

How to fight against canker

Trees that are vulnerable to canker

Black spot disease, diagnosis and treatment
Black spot disease is diagnosed when black or brown spots appear on leaves. It impacts many trees, but doesn't usually…
Fruit flies, how to fight them
Very small flies score the fruits with their ovipositor to deposit their eggs inside. These eggs will hatch inside the…
Sycamore lace bug, organic treatments to control it
The sycamore lace bug can potentially devastate all plane trees. It is actually a stink bug that comes to "suck"…