Home » Gardening » Treating diseases and pests » Rust, techniques and treatments to avoid it

Even though the number of fungal diseases called “rust” is very high, they almost always share the same symptom: brown-orange blisters appear on the underside of leaves with yellow stains on the topside.

What factors lead to the appearance and spread of rust?

This disease most often appears during moist weather or excessive watering on leaves.

Wind can spread it to other plants in the garden.

When does rust appear and spread?

From the beginning of spring till the end of summer.

Which plants are vulnerable to rust? 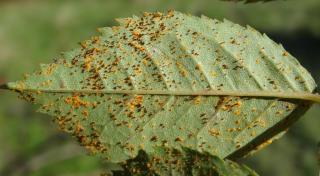 There are a great many species that can develop this disease.

Rose trees are very often contaminated with rust, but many flowers, fruit trees, trees, shrubs and vegetables can be impacted as well. 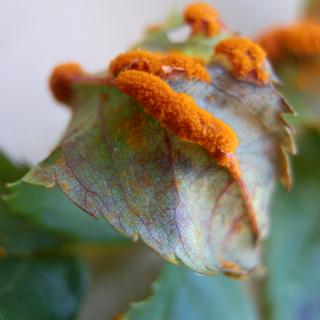 In most cases, rust does not fatally endanger the life of the plant.

In the very worst case, all the leaves are lost.

What is especially problematic is contagion, the spread of the disease to other leaves on other plants.

It results in rose shrubs not looking very nice in August.

Although there are many different types of rust, the once most commonly encountered has the latin name Phragmidium mucronatum.

How to treat against rust

Effective treatment products are often sold under the label “rose tree disease” and can be used to treat other plants as well.

Here are a few natural fungicides made from fermented tea, they’re easy to make yourself:

Other diseases and treatments

Sooty mold, techniques and organic treatments to avoid it
When leaves are covered with a blackish substance, similar to black soot that would have collected overnight, it is a…
Scab, avoiding the disease
Often called apple scab, this fungus is responsible for important damage to this fruit tree, but also to plum trees…
Downy mildew, techniques and organic treatments to avoid it
Famous for being vineyard owners' #1 enemy, downy mildew is a constant threat to grape harvests. This blight also threatens…