Chlorosis isn’t actually a disease. It is actually a physiological deficiency that plants endure when certain minerals or trace elements are found lacking in the soil. This occurs often when there is too much active lime.

An excess of limestone blocks plant roots from taking in certain elements such as iron.

Symptoms: How to recognize chlorosis?

Secondary symptoms differ depending on the type of chlorosis.

Some cases of chlorosis are caused not by lacking nutrients or minerals in the ground, but by diseases like fungus or bacterial infections. For instance, chlorosis is a symptom of a Xylella infection on olive.

Which plants are the hardest hit?

All plants can experience chlorosis. Nonetheless, some are more vulnerable than others. This is clearly the case for plants that love acidic soil, such as Azalea, Hydrangea, Rhododendron, etc., as well as for “calcifuge” plants of which rose trees are a classic example. Soil type is important for these particularly picky plants. Whenever there is too much limestone in the soil, be sure to expect iron chlorosis.

If you can, it really helps to get a soil analysis done in your garden to prevent chlorosis. This will tell you if your soil contains too much limestone, or if basic trace elements are found lacking. The following elements and minerals are crucial for photosynthesis: magnesium, potassium, zinc, nitrogen, phosphorus, iron…

Many garden centers can help you test your soil. Check with the one nearest you how to go about it.

Iron chlorosis is the easiest deficiency to deal with. All you need to do is tweak your soil until the pH reaches 6.5 or lower (more acidic). In order to do so:

Most common case: plants in the ground 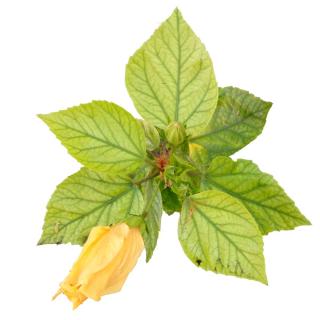 When you’ve identified which particular deficiency you’re dealing with, several options open up:

In this case, it’s even easier to manage. Since chlorosis is directly linked to soil quality, this disease usually simply signals that the time has come to change the potting soil for your plant.

But if you’ve repotted your plants recently, and still see no sign of them getting any better, just follow the same steps as for plants growing in the open air.

Another path to go is that of regularly applying fertilizer, preferably a fertilizer that contains high levels of trace elements.

Garden stores also sell products for adding during watering sessions. Look them up under the “anti-chlorosis product” label.

A famous old tip to fight against chlorosis, especially due to iron deficiency, is to bury rusty old metal items under the soil surface.

Credits for images shared to Nature & Garden (all edits by Gaspard Lorthiois):
Bird of paradise with chlorosis by Scot Nelson under Public Domain
Chlorosis on hibiscus by Scot Nelson under Public Domain
Meet the community
Need advice? Share your garden joys & woes!
Live from the forum
Please help with my plant, a ficus with yellowing leaves Why leaves on dragon fruits turn yellow? Portuguese Laurel new leaves turning black and yellow

Whitefly, techniques and organic treatments to avoid them
Whiteflies are tiny insects that can attack all kinds of plants, particularly: hibiscus, geraniums, greater celandine, fuchsia plants and certain…
Tomato early blight, the dreaded Alternaria fungus: alternatives to beat it
This blight is a true plight! Early blight covers tomato plants with black spots, and even makes the fruits inedible.…
Aphids, how to get rid of them?
Aphids are fearsome insects that attack leaves and feed on plant sap. There are natural ways to treat against them.…