Azalea japonica is a small heath shrub that provides evergreen, bushy growth. Its main appeal, however, is the massive blooming: beautiful flowers ranging from pink to red, purple and white.

Since it grows up to 5 to 6 ½ feet (1.5 to 2 meters) tall, depending on the species, Azalea japonica is the ideal shrub to fill in a heath plant flower bed.

It is important to not over-expose your Azalea japonica to sunlight, so favor a spot that is partly shaded.

Pruning and caring for Azalea japonica

It isn’t necessary to prune the plant. Nonetheless, if you wish to balance the shape or reduce the size of your azalea, wait until blooming is over.

The surface-most roots of Azalea japonica are the most thirsty roots. They especially require frequent watering in spring and summer. 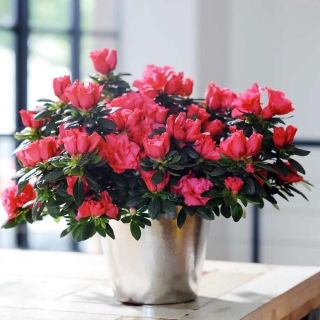 The shallow root system and small size of Azalea japonica makes it an ideal candidate for container growing on a balcony or terrace. Prepare heath plant soil mix and ensure the pot or container is wide enough.

Depth of the container or pot isn’t an issue, to the point that you can save soil by filling the lower half with rocks or hollow space fillers.

It’s best to wait for the blooming to end before repotting. Flowers are very demanding in terms of nutrients, which is why you shouldn’t risk damaging the fragile root system at this time.

This is especially true if the pot is rootbound. Indeed, rootbound plants have roots that circle round and round in their pot. Usually this happens when repotting is delayed.

After the blooming, prune the branches lightly and shape the plant as described above, and proceed to repot immediately.

Growing Azalea japonica as a bonsai 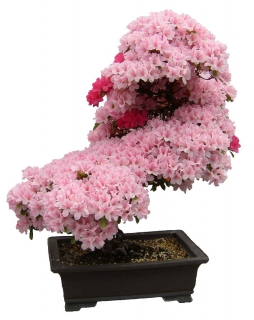 Since Japanese azalea has long been grown as a bonsai under its more specific ‘Satsuki’ and ‘Kurume’ varieties, why not try it out yourself?

Your Japanese azalea might have to fend off red spider mites, leaf gall, and root rot.

This is a fungal disease induced by the Exobasidium vaccinii germ.

Here are a few symptoms of this damaging disease:

By the time you notice this on your shrub, sadly, it’s usually too late to heal the plant. You’re facing a case of root rot caused by Phytophthora bacteria.

We’ve talked about the ‘Satsuki’ and the ‘Kurume’, two hybrids only propagated through cuttings. But there are many more types of Azalea japonica to be explored!

Thanks to the many varieties, it’s only a question of time until you find an Azalea japonica that hits your sweet spot!

Is Azalea japonica the same as Rhododendron?

Three key reasons explain why Azalea japonica are often grouped within the Azaleastrum section of the Rhododendron family:

So, in a way, they’re simply a group within the larger Rhododendron family.

How is Azalea japonica different from other azaleas?

Japanese azalea is said to be an evergreen azalea. This means it keeps its leaves in winter. The plant only sheds older leaves when newer ones have taken over, except for the rare bout of really cold weather. On the other hand, regular azaleas are often deciduous and will lose all their leaves every year in the cold season, even during mild winters.

Additionally, azaleas of the deciduous type have larger, longer leaves. This contrasts with Japanese azaleas that have smaller leaves, at most 2 inches (5 to 6 cm) long.

All there is to know about growing Azalea japonica 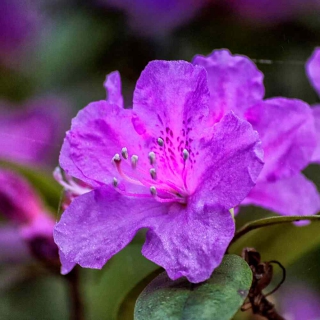 This shrub is actually a small-flowered rhododendron. It bursts forth in spring with a beautiful bright and colorful bloom.

Moreover, Azalea japonica grows into a nice round shrub. This dense shape is perfect because it highlights the generous blooming and the deep green leaves.

Note that Azalea japonica might lose its leaves in case of strong frost spells, but this won’t have any incidence on the plant itself.

To enhance shrub growth, mulch the ground around it to retain moisture.

Favor any acidic mulch such as pine bark mulch.