Home » Gardening » The fruit Orchard » Plum tree, how to have great plums

Plum tree is magnificent from spring to fall, and offers abundant harvests of plums.

Planting, pruning and care are important to avoid diseases and ensure that your plum trees develop well.

Favor planting in fall or in spring but avoid freezing temperatures.

Remember that for all fruit trees, the best period for planting is fall, because this season has the highest success rate for root development in spring.

For a plum tree, pruning fulfills two functions: caring for the tree itself, and enhancing fruit harvest.

It’s recommended to prune only what is strictly necessary because plum trees are delicate and wounds make it vulnerable to diseases.

After each cut, apply pruning paste like pine tar to protect the wood from fungus and other diseases.

Nonetheless, you may perform directional pruning in the first year to shape the structure of the tree.

After having harvested the plums

Maintenance pruning is performed in winter but not during freezing weather.

After pruning, using pruning paste helps avoid infection due to fungus and diseases.

Plum trees, like most fruit trees, are vulnerable to multiple diseases and parasites.

Again, aphids are the plum tree’s most common enemy. Here is how to fight aphids efficiently.

As a deterrent against aphids, several organic treatments are available such as spraying fermented stinging nettle tea or fermented horsetail tea. Both help reinforce the plum tree’s defense mechanisms and also help it avoid certain types of fungus.

Also, if fungus such as plum rot (European brown rot) or rust appear, there are specific treatments that can be applied.

Other insects and diseases that attack plum trees 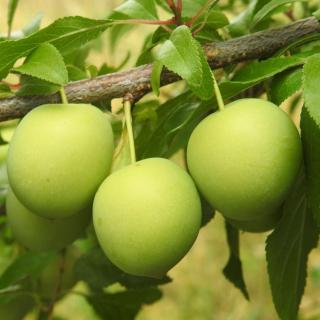 Harvesting usually takes place in summer, but when exactly depends on the type of plum tree and on the local climate.

When purchasing plum trees, try to select varieties that are adapted to your local climate. This will guarantee that you will have a great harvest at the right time.

It is important to not let the fruit ripen for too long on the tree because it starts rotting and falls to the ground.

Sadly, it is very difficult to keep plums for very long. That’s why it is often recommended to eat them quickly.

Plum trees are fruit trees, and their fruits are both eaten fresh as plums or preserved in various manners such as jams, liquor, pastries or simply desiccated as dried prunes are, a specialty in the French region of Agen.

Plum trees are also grown as ornamental plants since their blooming is generous at the beginning of spring and their foliage stays appealing until the leaves fall off.

Fruit-bearing will be greatly enhanced if manure is added at the base of the tree in fall, and if fruit tree fertilizer is added in spring.

All plum trees, be they ‘Mirabelles’, ‘Damsons’, ‘Valor’, ‘Miraclaude’ or ‘Thames Cross’, give fleshy fruits with high vitamin C, calcium, and mineral content.

Yellow-orange ‘Mirabelles‘ stand out from blue-colored ‘Damsons‘. These varieties are often cooked for dessert.

The plum used to prepare the famed Agen dried prune is the ‘Prune d’Ente‘.

Mix different varieties in order to enhance pollination and hence productivity. This is called cross-pollination.

If you only plant one plum tree, choose a self-pollinating variety such as ‘Prune d’Ente’, ‘Mirabelles’ or ‘Damsons’.

Mulch the foot of the trunk to avoid weeds, protect roots from the cold during winter and retain moisture in the summer.