Starting in September, October and sometimes even November if the climate is mild enough, pears are harvested. Learn to store and keep them well.

Not counting those that fall to the ground and must be quickly eaten, and those that seem to be infected with diseases, worms or fungus, there still often remains a sizeable portion of perfectly healthy pears that can be kept all winter long.

In proper storage conditions, pears will keep long enough for you to eat them until the end of winter, even the beginning of spring.

From harvest to storage, here is the procedure to follow for the best possible preservation of your pears.

Although all pears can keep for several months with proper storage conditions, some varieties stand out in that they keep more easily. A few hold well and are even palatable until spring.

Here are the pear tree cultivars that keep for a very long time since they mature very late:

There are still many more, since the number of pear varieties is incredible!

This is an important step because it has a direct impact on how long pears keep.

No point in picking up fallen pears, they are very fragile and will only keep for a few days. You must eat them quickly or prepare culinary wonders such as pear liquor, Belle Helene pear dessert, pear yogurt cake, cinnamon cracker mousse with fried pears, or pear compote…

You must collect the pears directly from the tree, and they must be carefully chosen and picked in dry weather.

Selecting the pears that will keep best

To ensure that each pear is pristine and doesn’t bear any trace of disease or fungus, the first step is to segregate the “1st class” pears.

Storing and keeping pears for the winter 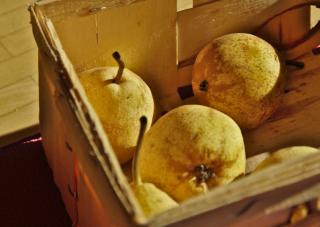 In proper storage conditions, you’ll be able to keep your pears past Christmas, even until spring.

With this bit of advice, you should be able to keep your pears for many a long month, and thus savor fresh fruit in winter.

Disinfect the surfaces you’ll be resting your “Class A” harvest, and let it dry before placing the pears on it.

Credits for images shared to Nature & Garden (all edits by Gaspard Lorthiois):
Two pears on a stump by Kerstin Riemer under Pixabay license
Trays and crates for keeping pears by M W under Pixabay license
Meet the community
Need advice? Share your garden joys & woes!
Live from the forum
Pear tree not bearing any fruits apples not appearing on my three trees kieffer pear roots surrounded by lily bulbs

Nectarine, the tree that bears nectarines
The nectarine tree belongs to the same family as the peach tree, and it is an exceptional fruit tree that…
Almond tree, amazing when blooming
The almond tree is a simply magnificent fruit tree, famous for its spectacular pink-white blooming. A summary of almond tree…
Fruit flies, how to fight them
Very small flies score the fruits with their ovipositor to deposit their eggs inside. These eggs will hatch inside the…