Picholine olive is a special olive variety native to southern France. Consumers are often unaware of the fact: olive oil from Nîmes was awarded in 2004 the title of “controlled designation of origin“: Appellation d’Origine Contrôlée (AOC) in French.

This is a testimony to the quality of the product, and a recognition of the dedication to keeping ancestral local knowledge alive!

Growing conditions for an olive tree are ideal in the Gard region:

Several olive cultivars ripen side-by-side in Gard olive orchards. Dominant among these is the ‘Picholine’ variety, boasting a unique taste both rough and slightly peppered.

This specificity made it possible to distinguish the oil and resulted in the AOC title: 70% of this AOC oil comes from this particular variety.

Other varieties are added during processing to polish the base variety’s taste, like the ‘Aglandau’ and ‘Negrette’ varieties. Some producers offer single-variety oils made from each of these cultivars.

Since the title was awarded, Nîmes orchards are burgeoning and developing significantly. Today, the Gard area has dedicated nearly 10,000 acres (3 900 hectares) to growing olive trees for oil production. This is around 8% of all surfaces in France used to produce plant-based oil. The area ranks in 3rd place in oil production volume compared to other French areas. 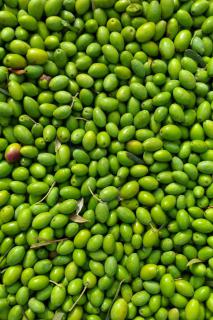 Planted at the beginning of fall or in spring, young olive trees are pruned when they turn three years old. They bear their first fruits at five years of age, and produce a full harvest at eight years.

The low-key blooming of olive trees happens end of May. In July, fruits grow larger, the seed itself turns rock-hard. Oil appears in the olives in August, and speeds their plumping until September-October when the first green olives are harvested. Beginning of November is when the olives change color (this is called veraison), and they are harvested for oil until January.

Whatever the variety, a green olive is an olive that is not yet ripe, whereas a dark olive is clearly mature. How dark they get depends on the variety. Harvest date is decided depending on how intense the oil should be when produced. Barely ripe olives are more flavorful and contain more polyphenols, and black ripe olives are less intense, but have a higher, more productive, oil content.

Cherry tree, an easy and generous fruit tree
Cherry trees are among the most common fruit trees found in our orchards. Key Cherry tree facts Name – Prunus…
Kumquat, a tiny, original citrus
Kumquat is a citrus for which you can eat the skin together with the cute fruits. Key Kumquat facts Name…
Blackberry bush and blackberries, delicious small summer fruits
Blackberry shrubs offer delicious blackberries if you care for them well. Basic blackberry facts Name – Rubus fruticosus Family –…