Cinquefoil is a very cute shrubby plant that is easy to care for, and which has a blooming that lasts all summer long.

When purchased in containers, cinquefoil is planted in fall or spring. This little flower shrub’s versatility helps it adapt to all types of soil, whether rich or poor, dry or slightly moist.

Bushy cinquefoil is very easily multiplied through cuttings, by collecting young sprigs during the month of August.

Pruning and caring for cinquefoil

Cinquefoil is easy to care for, and a simple light yearly pruning should enable you to keep a cute, bushy bearing and stimulate the summer flowering.

It is a good idea to water cinquefoil regularly the first year after planting to favor root development.

Once properly settled in, normal rainfall should be more than enough to fulfill the needs of the plant.

All there is to know about cinquefoil 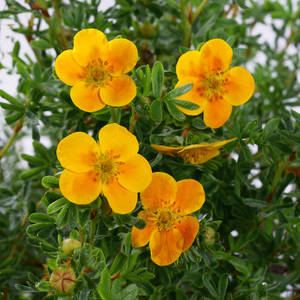 A very beautiful blooming distinguishes this fast-growing shrub which is very easy to cultivate.

You’ll be rejoicing in its very cute flowers for a long time since they appear repeatedly from spring to fall.

You might find some annual species among the cinquefoils, as well as other perennials and lastly small shrubs. This bushy cinquefoil has a very interesting bushy composure, an abundant blooming ranging from white to red through yellow.

It is particularly elegant along edges, as well as in a flower bed and on rocky ground.
This plant is particularly well suited to growing in pots on a terrace or balcony thanks to its rather restricted growth.

Lastly, note that cinquefoil is extremely hardy, and holds perfectly well to negative temperatures down to -13°F (-25°C).

Take advantage of the cinquefoil’s low height to pair it with perennials.

Read also on the topic of shrubs

Bigarreau cherry tree, the ultimate cherry
The bigarreau cherry tree produces beautiful cherries, sweet and fleshy and firm, and its productivity is abundant. Basic Bigarreau Cherry…
Beurré Hardy pear tree, early and abundant
The 'Beurre Hardy' pear tree is one of the earliest fruits for harvest in orchards at the end of summer.…
Apricot tree, producing delicious apricots
The apricot tree is a wonderful fruit tree that requires a bit of care to produce beautiful apricots, but it's…