The chestnut is definitely a fruit that symbolizes fall. Available from mid-September onwards, there’s a six-week time frame during which ripe chestnut can be harvested.

It’s of course a joy to the taste buds all the way to the Christmas season!

A source of food since prehistorical times

Belonging to the same family as the oak tree, the chestnut tree species prospered during the Tertiary period. Mankind has been harvesting its fruits for thousands of years. Its wood is used to build and furnish homes. Tradition honors it as the “food tree” that best fulfills its purpose among its peers.

Growing and caring for chestnut has made it possible for people in mountain areas to survive even where growing grain crops is impossible. In some areas like Corsica and the French Cévennes, chestnut is called “poor man’s meat”.

To this day, over 700 specific varieties have been catalogued by the French National Agronomic Research Institute (INRA).

Don’t confuse it with its cousin, the horsechestnut 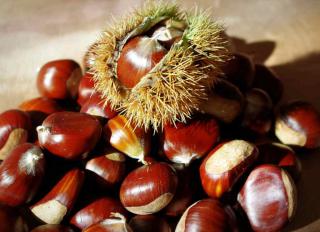 Note that the fruit of the horsechestnut tree (species most commonly found in Europe) isn’t edible. As for the chestnut, best is to choose it shiny and flawless.

Dice the lamb shoulder into large cubes. In a cast iron cooker, fry the lamb at full heat for a few minutes with the olive oil, just for the outside to turn brown. Add salt and pepper. Crush the garlic cloves while still in their husk and toss them in the cooker together with the onion (diced), thyme and laurel. Sweat the spices for a few minutes and add the walnut wine to deglaze the cooker. After boiling off some of the liquid, add flour and stir. Pour 8 fluid ounces (25 cl) of hot water and stew for 1 and ¼ hours at low heat. Peel and dice the squash. Incorporate the squash cubes and the chestnuts in the cooker and cook for a further 15 minutes. Pull the cooking pot from the stove, add in the walnut oil and stir. Serve directly from the pot.

European brown rot, rotting fruit, techniques and treatments to avoid and cure the disease
European brown rot is a fungal disease caused by fungus that attacks fruit trees and can seriously impact harvests.  It…
Bottlebrush buckeye
Bottlebrush buckeye is a shrubby tree that spreads more than it grows tall. It's a relative of the chestnut tree…
Mandarin, the ancestor of Clementines, delicious fruits and hardier tree
For a long time, the mandarin orange tree was only a second choice: people preferred planting its cousin, the clementine…