The acidic soil-loving chestnut tree is much appreciated for its round silhouette, its resilience, and most of all, its fruits! Chestnuts share an incredible abundance of nutrients, not to mention the delicious honey bees produce from the flower’s nectar.

Learn how to grow a chestnut tree!

Where and when to plant?

The chestnut tree appreciates direct sun but also does fine in part shade. Fruiting is best wherever temperatures exceed 68°F during summer (20°C). However, it prefers cool, well-draining and fertile soil. Chestnut does not tolerate alkaline chalk soil, the pH must stay within the 5 to 6.5 range (acidic). Planting is best in spring or fall, outside periods of frost.

How to plant it?

How to care for a chestnut tree?

It’s recommended to water well at the end of July, this will greatly increase the blooming in the following year. Remember to always keep adding to the layer of mulch around the trunk, it helps keep the soil cool.

How to prune a Castanea sativa?

Typically, softwood pruning is performed, also called greenwood pruning or summer pruning. This tends to increase bud appearance. In June, young stems are pinched at the tip to slow their growth. At the end of summer, the time has come to eliminate branches that are set too low, and those that compete with the dominant leader trunk whenever the trunk splits into a Y shape. When your tree reaches 5 years of age, simply remove branches that aren’t pointing in the right direction. The goal is to thin those away to help light penetrate to the center of the crown.

Diseases and pests that attack the chestnut tree 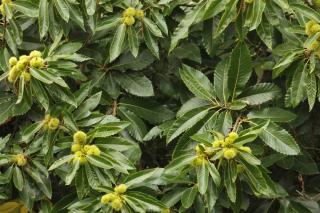 This fungal disease is caused by Cryphonectria parasitica, a fungus that also infects oak and maple trees. It creates red swollen outgrowth on the bark. A treatment exists which is similar to vaccination: every year, a special, milder strain of that very fungus is inoculated under the bark of the tree. It colonizes the tree and more aggressive, natural strains can’t infect it anymore. To avoid the disease, remember to disinfect your pruning tools before using them, and apply pruning paste on open tree wounds.

Infected trees lose their vigor, begin to wither, and in the end a dark ink-like liquid oozes from the base of the trunk. This fungus, Phytophtora cambivora, creates a black substance on roots. Once it’s infected, the tree dies within 5 to 6 years, and there is no known treatment. The solution is to use a rootstock that is known to be invulnerable to the disease, such as Castanea crenata.

The tiny caterpillars of this moth nibble on fruits and destroy the harvest. The easiest way to fight it off is to pick any chestnuts that fall to the ground prematurely and burn them. Thus, the caterpillars can’t burrow underground, which is where they usually go to turn into new moths. Another option is to use a pheromone trap to disorient moths as they try to reproduce.

When and how to harvest chestnuts?

The harvest takes place from end of September to mid-November. When the hulls split open, it means they’re ready for picking. To avoid pricking your fingers, twist your foot on the hull on the ground and it’ll open up, then you can pick the fruit without hurting yourself.

October in the garden, what there is to do
The last days of mild weather merge with the flamboyant hues of autumn leaves. Leaves start falling from trees to…
Bottlebrush buckeye
Bottlebrush buckeye is a shrubby tree that spreads more than it grows tall. It's a relative of the chestnut tree…
Harvesting and keeping 4 key fruit crops in Fall
September is a generous month, harvests are plentiful: apples, pears, walnuts, chestnuts... Sometimes, when we don't know how to keep…