Perhaps one of the least hardy European lavenders, Spike lavender will thrive in climates that are, at most, tickled by light frost.

This type of lavender produces many fragrant flowers that branch out from heavenly-scented leaves. Excellent for dried flowers.

Spike lavender is excellent for rock walls, rock gardens, and nooks and crannies in an old stone wall. It will also do great in well-draining planters.

Where to plant spike lavender

However, freezing might be an issue: spike lavender can’t take temperatures much lower than 20°F (about -5°C). It has been seen to survive colder temperatures, though, down to 5°F (-15°C), but this was typically for winterized plants.

It is especially vulnerable to root rot. This disease is triggered by stagnant water around the roots.

Secondly, it’s important to keep the soil from being too acidic.

How to sow spike lavender

Spike lavender, unlike Lavandin, is a fertile species. Bees and butterflies such as the cute “large white” pollinate it as they reach for nectar in each individual flower.

When to water spike lavender

Usually this isn’t a concern:

Too much watering will make the lavender’s fragrance more bland.

There is no need to provide any form of fertilizer.

How to prune Spike lavender

Best is to prune when winter starts giving way to spring.

Spike lavender pruning is identical to that of other types of lavender.

Here is a complete page on how to prune lavender.

Learn all about spike lavender

During Ancient Roman times, lavender was used to scent water. Extracts from flowers and leaves gave fragrance to bathing water in the traditional “therms”. The latin name of lavender, “lavandula” means “to wash”.

The flower stems often branch out to bear several panicles of lavender-colored blooms. Unlike French and Spanish lavender, there aren’t any winglets at the tips of each flower. 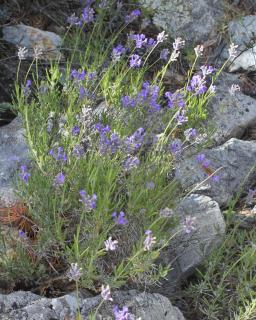 Curiously, “spike” lavender has nothing to do with spikes or thorns. It’s derived from an old scientific name for the plant, Lavandula spica.

This is because spike lavender is also, quite often, the home of European asp. Asp, or aspic, is a small viper that grows almost two feet long. It’s very toxic if it bites you!

Caution: Although shepherds of old would use spike lavender to treat snake bites, it’s crucial to reach a clinic or hospital as fast as you can!

Planting lemongrass near your spike lavender will help repel snakes, as will using (again) shale mulch: the sharp edges and heavy material will discourage snakes from nesting nearby.

Grand Vert, the basil with large, even tastier leaves
Grand Vert basil key facts: Name – Grand Vert Basil Botanical name – Ocimum basilicum 'Grand Vert' Family – Lamiaceae…
All there is to know about pruning hydrangeas
Hydrangea is a beautiful shrub, and pruning helps boost blooming and makes the plant healthier. Pruning a hydrangea is an…
Basil, very tasty leaves
Growing basil yourself is easy, and it is even a great idea for all who like to spice up their…