Slate mulch will make for most striking contrasts together with your plants. This dark gray stone evokes the harsh weather of Brittany or the immediately charming Japanese garden.

This slate mulch is simply perfect for plants that love acidic soil, such as hydrangea, rhododendron or camellia. Long-lasting, it is easy to set up.

Slate mulch stands out for its ornamental properties and flat, surface-covering capabilities. Also a natural source of iron, its gray and sometimes amber color is what makes it radiate a feeling of rough, harsh nature.

Slate mulch has many advantages, both as an ornament and from a practical point of view.

Depending on where the slate comes from, slate mulch color can be pencil-gray, blue, black and even purple or green. This is due to differences in chemical composition of the rock.

Since it reflects light upwards, it helps provide light for sun-loving plants even when not planted in full sun.

How to use slate mulch

Simply layer the mulch out in a layer about 3 inches thick (8 cm). It’s ok if it isn’t a very even layer.

To avoid breathing in slate dust, wear a dust mask.

How to spread slate chips 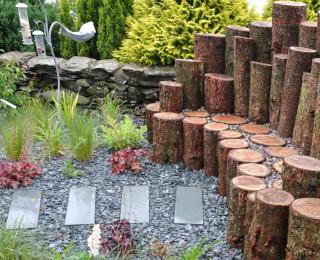 Pour small mounds of slate mulch every foot or foot-and-a-half (30 to 45 cm) and rake them flat afterwards.

A sturdy rake will do the trick.

Use a strong pail with a strong handle.

Best is to set the bag of slate mulch on a strong work bench.

After three or four years, soil and dirt tend to come up and cover the slate mulch. To bring the flower or shrub bed back to its original elegance, you can either chose to buy new slate mulch, or to dig up the previous one and clean it up.

A layer of fresh slate mulch needn’t be as thick as the original layer.

You can recover your previous slate mulch relatively easily.

Recovering your slate is a great and inexpensive way to get your garden look astounding again. You’ll be maximizing your past investment for years!

Where to find slate mulch

Rooftops in some areas are traditionally covered with slate shingles. This is particularly true in Europe and in some parts of Maine, in the North-East United States.

Get in touch with a local roof-builder to recycle their waste such as broken shale shingles, old roof shingles being replaced, etc.

It’s a great way to recycle in the garden!

Slate mulch is very similar to shale mulch. Any supplier having one might also be able to have the other.

If you want your hydrangeas to bloom in a beautiful blueish tint, mulch its base with slate.

Credits for images shared to Nature & Garden (all edits by Gaspard Lorthiois):
Japanese-style garden with slate by Florentaise
Slate mulch and log couch by Wildroof under © CC BY 2.0
Layer of slate mulch by keriluamox under © CC BY-SA 2.0

Meet the community
Need advice? Share your garden joys & woes!
Live from the forum
Heather on the wall at the neighbor’s Can’t take my eyes off my hydrangea! Green hydrangea that grows short and stout Hydrangea flowers with different colors

Shale, an ornamental mulch
Shale is a very decorative mineral mulch that lasts a very long time, and which boasts excellent aesthetic and covering…
Home-made mulch, the DIY-solution is better than stores!
Garden stores have all sorts of mulches, designed to perfectly match the needs of plants and protect them through summer…
Green manure, use cover plants to fertilize the next harvest!
It protects the ground from weeds and enriches the soil with nitrogen and humus: green manure scores perfect on all…