The only certainty about this topic is that we seem on the verge of a revolutionary breakthrough! Seemingly risk-free, these preparations in pellet or powder form promise wonders regarding water management. They’re said to help watering your pots on the balcony and help for large-scale agriculture. But truth be said, little is known about the long-term effects of hydrogels on soil, plant life, and animal life – us humans included!

Even before modern science explored industrial manners of increasing water retention in soils, agriculturists were hoping to find ways to reduce runoff and make rainwater “stay there” for crops to use. There’s many different forms of irrigation, and modern hydrogels are assuredly the most recent development to date.

However, there are actually many different types of hydrogels. Let’s try to make sense of them.

One single word is the key to all of them: polymer!

But the devil is in the details, and not all polymers are as good as they sound…

What is a superabsorbent polymer?

All living things, from a material point of view, are built up from atoms that are associated to form molecules.

Many molecules are small – think “H20” for water here – but some are quite large, like the DNA that holds a transcript of most of our genes. Quite often, the larger molecules are actually a repetition of many smaller molecules, each dubbed a “monomer” that connect to form one long chain, the “polymer”.

A superabsorbent polymer is such a polymer that is special in how it reacts to water. It has the peculiar trait of having two very different states or shapes:

These superabsorbent polymers, or hydrogels, are specifically designed to retain and release water in the hope of helping plants cope with irregular rain or irrigation.

Hydrogel material is always one of the following three major groups:

Here are the differences among hydrogel polymers

Claims, facts and advantages of hydrogel 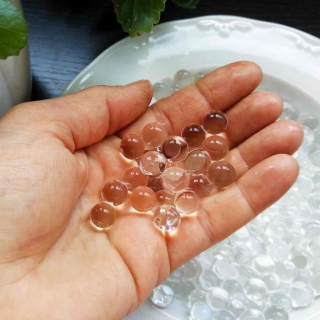 Hoarding water and releasing it slowly to plants around it is the primary claim that hydrogel manufacturers put forward.

A hydrogel, or superabsorbent polymer, is characterized by either of the following two metrics:

For example, the children’s toy Orbeez ® claims it swells over 150 times the original size of the pellet.

A special cellulose-based hydrogel called Polyter ® claims it can absorb up to 500 times its initial weight in water.

Special polymers developed in laboratories reach ratios of up to 1,500! Such a capacity to retain water explains why they’re usually used in small amounts in agricultural applications. Usually, only a couple pounds or kg is enough for an entire field.

Theoretically, it should be possible to design water-absorbing polymers in such a way as to make it possible to never need to irrigate at all. All that’s needed is at least one day of natural rainfall in the year. All the water on that single day of rainfall could be absorbed by the hydrogel embedded in the soil. As time passes, it would slowly be released to the plants around it.

Since they swell and shrink with each water cycle, the water crystals push the soil around them away and provide small crevices.

Furthermore, this is particularly relevant when soils have been depleted of plant and animal life. Normally, worms and a bugs bore tunnels as they hunt and forage underground. However, in contaminated, dead soil, they’re absent and the ground stays packed. Hydrogel compounds are a solution to make plant recovery easier.

When gallons and liters of water pour down from the sky, usually only a fraction of it is absorbed by bare soil.

Most of it pools together and runs off, forming rivulets that drag away nutrients and smaller sediments. Soil is left bare and isn’t very nourishing. This is called erosion.

Since a single gallon of superabsorbent material can absorb hundreds or even a thousand gallons of water, much if not all of the water is captured on-site. It won’t collect to run off.

Water isn’t lost to evaporation since it’s held back in the crystals.

Roots have a gift in that they always find their way towards water. It has been observed that roots will always locate and colonize pellets or crystals saturated with water.

They’ll even grow in and around it to maximize surface contact, forming curious nodes that aren’t so common in the natural world.

The water retention of the hydrogel slush is high enough to prevent loss through evaporation, but not too high that roots can’t pull the water out. This makes it a great medium for the plants to grow.

When pre-loaded upon manufacturing, hydrogels can be infused with chemicals.

As water cycles in and out of the chain-like structure, some of these chemicals are leached out to the environment.

This confers precious properties to the hydrogels. Often it is used for good purposes, like Polyter, which adds organic fertilizer compounds to its cellulose-based polymer structure.

At other times, it’s used to spread poison, such as when Monsanto, recently acquired by Bayer, integrated synthetic polyacrylamides (a type of hydrogel made from petroleum) to herbicides. This ensured that the herbicide would stay put and take years to leach out into the ground, sterilizing land or killing off wild flora.

Hydrogels in agriculture are very recent developments. There isn’t much research on the various dangers that might result from using superabsorbent chemicals over extended periods.

An in-depth review of hydrogel risks that have been considered:

The conclusion was rather surprising: although using both manure and hydrogel did produce the highest results, pure manure came in a very close second.

Great organic, healthy solutions to provide sufficient water and nutrients for your plants are already within reach.

Along with ancient and modern irrigation solutions, this ensures that the soil in our gardens will stay as healthy as nature has intended it to be!

Potted mimosa, grow that winter sun at home!
Mimosa blooms in winter with warm, yellow flowers. Grow it in a pot near a window! Key facts on potted…
Shredder and composter, how to make the right choice
To convert your green waste into green gold like mulch and compost, invest in both a shredder and a composter.…
Potted basil for terraces, balconies, decks and indoors, too
Growing basil in pots is easy, and it is even a great idea to start growing potted basil in spring.…