Home » Gardening » Garden Flowers » How to prune lavender that is woody

Lavender is often a sentimental plant. After about a decade, it tends to grow old, woody, and overgrown. Learn how to prune it and give it new life.

Dealing with woody lavender is more difficult than for other shrubs. Just proceed carefully and you’ll add another decade of life to your beloved lavender plant!

Woody lavender, not an easy patient

Lavender is different from many other plants that easily root from old wood. Some shrubs can take severe pruning and hatracking, but pruning lavender too hard would kill it. 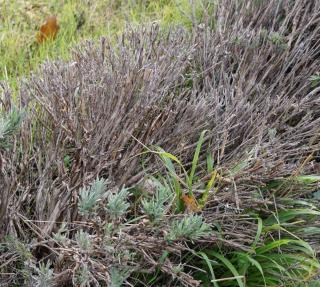 There are two ways to rejuvenate old, woody lavender:

A different strategy is to start a new plant from the old one. This can be done through:

Let’s take a look at each of these techniques! But first, a short overview to explain why lavender doesn’t grow back from old wood… as a result of evolution and adaptation!

Lavender will not grow back from old wood. This basic fact means you can’t simply cut it short, since it won’t grow back.

Cutting back the entire plant all the way to the woody part is too much of a shock for the plant.

This drought specialization came at the cost of propagation. Buds on old wood cannot sprout through the bark to turn into leaves and new stems.

Lavender is successfully armed against grazing.

Most animals like deer and rabbits hate eating lavender leaves and stems of the plant.

This is mostly because of the strong-tasting essential lavender oil.

Nonetheless, it is possible to coax lavender into sending out new shoots from the base. The key to this is patience and care.

Racking up the pressure to trigger growth

A grown plant has a strong, established root system. It grew to provide the entire plant with nutrients and water. There’s quite some power in a root system that is sometimes a decade old!

Whatever the technique you choose to follow, the first step is always basic trimming back of lavender after the blooming.

For basic lavender pruning: stay within the “green leaf” area of the shrub.

All the methods for rejuvenating your lavender will require time.

Over a few years, typically three or four, you can reduce the size of your lavender shrub.

In a nutshell, the idea is to remove the longest branches in three or four batches of equal numbers.

Layering is the fact of burying a portion of a stem under soil. Roots develop within a year. The layered stem can be cut out from the mother plant after one or two years.

Part of the “hard pruning” technique involves keeping stems over a few years, so double your chances by layering them. It won’t interfere with new sprouting from the crown itself, and you’ll have more plants to go around afterwards!

A variation of the layering method is to bury the trunk and main branches of the old lavender plant. This is easy if the center is already bare with long branches falling over to every side.

Instead of replacing your lavender with a new, store-bought lavender, you can try to multiply your existing lavender.

Cuttings – this is how professionals propagate lavender.

Keep pruned woody stems and wrap other herbs around to make a special “Mediterranean bouquet garni” for cooking!