Lavender is a famous Mediterranean plant. Propagating lavender is possible through seed, cuttings, layering (ground and air). In some cases, division of the lavender clump is also an option.

Seeds, easy but slow and not always true to form

Natural lavender varieties have succeeded in reproducing through seeds over millennia. However, due to cross-pollination, the children plants are never 100% identical to the mother plant. 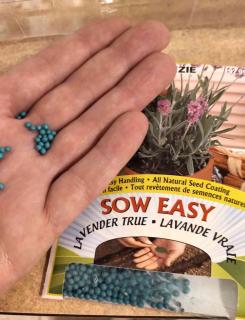 Lavender seeds are tiny, between 1 and 2 millimeters long. Germination, even in ideal settings, isn’t guaranteed. Sometimes a seed will sprout within a week, sometimes it might need 3 months!  Here, the picture shows commercial seeds. These have a protective coating on them that help retain moisture and make germination more certain. In the main lavender article, you can find a picture of lavender seeds without any coating.

Note that some lavender varieties are sterile. They either won’t make seeds, or seeds will appear but never germinate.

Cuttings, the way to go for large quantities

In summer, new branches can be snipped off from your favorite lavender shrub. Plants prepared from cuttings will already bear at least one or two flowers in the following year.

Lavender cuttings are prepared from recent wood. Ideally, growth that appeared since spring has started is best. There must still be leaves on the wood. If not, it’s too old.

Layering, a solution to replenish lines of lavender

Layering is the art of bending a branch down to the soil. There, it’s partly buried under soil, with a leafy portion of the branch sticking out on the other side. Roots form on the underground portion. After a season, sometimes two, the branch can be cut free from the mother plant.

With careful transplanting, it can be set up in a new growing spot. When you’re filling in a spot along a line, though, you can simply layer branches from two neighboring plants and leave them in place. 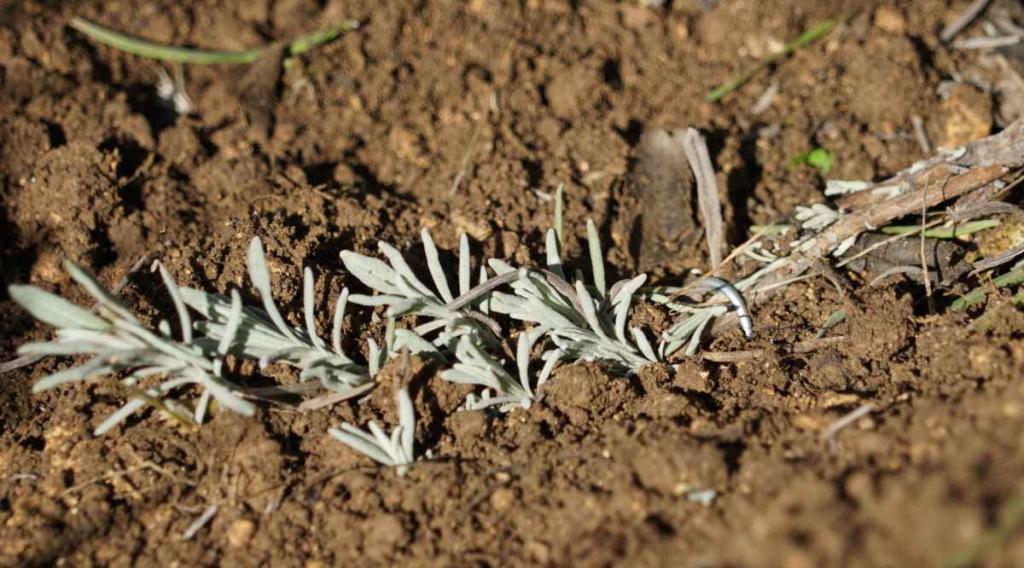 Larger lavender plants tend to layer spontaneously. In some cases, seeds might have self-sown and grown under the mother plant. You can divide the shrub in all these cases where your lavender bush has several live stems or trunks.

To separate the different plants that form a lavender that’s grown too large, follow these steps:

Air-layering, great to get potted lavender

A variation of layering is to “bring the soil up instead of twisting the branch down”. This technique is called air-layering, but it also goes by the name marcotting or marcottage. 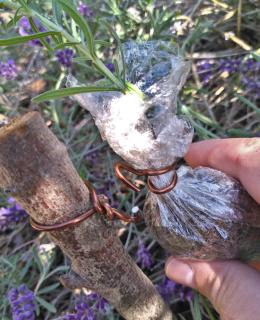 A small pouch with soil is wrapped around a portion of the lavender stem. This stem, young and still bearing green leaves, will grow roots in the pouch of soil. After a few months at most, rootlets colonize the handful of soil they were given. It’s ready to be cut off from the mother branch (under the pouch, not above it!).

This solution is perfect for potted lavender, since it creates a short seedling with a root clump that will bear flowers already in the next season.

Air roots forming on Ficus Ginseng
People love ficus ginseng for its thick, swollen apparent roots. In time, it'll even send down new aerial roots down…
Grow your own pineapples from scraps of the ones you find sweetest
Did you know you could grow a new pineapple from the leafy tip of the fruit itself? Making this pineapple…
Repotting, how to repot a plant and when
Repotting a plant is easy and it's an important step for plants to grow well. This provides space for roots…