Anthemis, a fabulous perennial with daisy-like flowers, blooms from spring to fall and is simply beautiful.

Foliage – evergreen
Flowering – May to October

Take delight in these little flowers that adapt to our climates so well.

In spring in a sheltered spot and in full sun. Anthemis requires rich and well drained soil because it loathes having its roots dwell in water.

Since anthemis fears winter frost spells, it will have to be planted in a pot if the temperature lastingly drops below 40°F (5°C).

If that’s the case, bring the pots inside in November in a cool dry room, and leave them there until spring.

Pruning and caring for anthemis

Give it a round shape at the beginning of spring, pruning the plant back lightly (about ⅓ the height of the stems).

This plant is vulnerable to freezing and won’t survive extended cold spells.

If you’ve kept them in pots, simply bring them indoors in a room that doesn’t experience freezing and keep watering them small amounts 1 or 2 times a month.

Anthemis in the ground

In the ground, it will survive from one year to the next if doesn’t freeze in your area.

If it freezes in your area, cut all the stems back short enough and spread thick mulch (an inch or two, several centimeters) on the bunch.

All there is to know about the anthemis 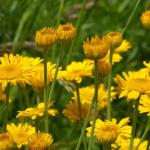 Sometimes mistakenly thought to be a daisy, anthemis will give you a very beautiful bunch of flowers from spring to fall. This plant is part of same family as the aster.

Its vulnerability to the cold is perhaps the only drawback one can pin on this otherwise appealing plant.

If you expect cold in the next few weeks and that your plant is rooted directly in the ground, surround it with mulch for the winter and even cover it with horticultural fleece.

If you have the option to bring your plant in to a cool lit place where it never freezes, do so.

Anthemis is very much at ease in pots, and the result is often a great success.

Coreopsis is a superb summer-blooming perennial. Its gold yellow flowers stand out with their purple-colored heart. Core Coreopsis facts Name –…

Autumn daisy, a festival of colors

The autumn daisy is famous for its ornamental value on tombs, but it is also a magnificent plant to flower…

I'd like to ask a question on this topic