The Handkerchief tree, the Dove tree, and even at times dubbed the Ghost tree, people’s imagination runs wild when it comes to giving this tree’s unique blooming a name. Undoubtedly, Davidia involucrata tickled his peer’s curiosity when Father David first described it in 1871.

The famed naturalist was at the time exploring China, an 11-year expedition that brought forth a great many discoveries, such as the panda bear. Undoubtedly, Davidia still is very uncommon in many of our gardens, even though it’s very easy to grow.

The only one in the family!

Undoubtedly, Davidia is actually one of only two species that are part of the Nyssaceae genus, together with an American tree called Nyssa sylvestre. Its round bearing and serrated, soft green leafage are similar to that of another tree that is more common: the linden tree. If you don’t control its growth, the tree tends to sprout several trunks. As an adult, the tree reaches heights of between 30 and 60 feet (12 to 20m). Heart-shaped leaves display clearly marked veins. They release a pleasant scent as they unfurl, and in the end are about 6 inches long (15 cm).

Its discovery, a tale worth telling 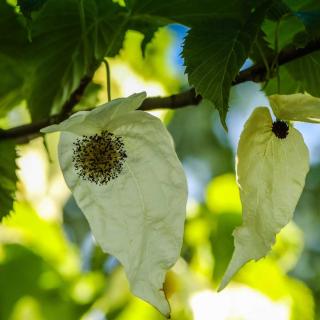 The handkerchief tree was first described in Western literature by the renowned naturalist Father David (1826-1900). His name was given to several plants native to China, such as the Buddleia davidii (the butterfly tree) and of course the Davidia. The tree was discovered in the Cheng-tu region, in the heart of China. Eleven years later, this explorer came upon another nearly identical variety.

Collectors and horticulturists – Veitch in England, Vilmorin in France – asked their missionary friends Wilson and Fargès, respectively, to bring seeds of the curious tree back. The Frenchman, Fargès, came back with seeds first, and of his batch only a single seed sprouted after two years in 1899. In 1906, the tree bore flowers for the first time. This particular tree is still alive, it blooms every year in the Vilmorin Barres Arboretum. It bear the following name: Davidia involucrata var. vilmoriniana. However, Wilson, though second to return, also came back with a prize. The variety he brought back was a bit different from that of Fargès, since on the leaves a light fuzz appeared. Today, this is the variety that’s considered the “type specimen” for the species.

2- “A flutter of gigantic buttterflies”

That’s how Wilson described the blooming. At 10-12 years of age, branches are covered with a flock of white “handkerchiefs”, about 8 inches (20 cm) long. The many names of the tree come from here! In reality, these aren’t the actual flowers. They’re technically leaves that have morphed and taken on another role, exactly like the red leaves of poinsettia and the colorful blooms of the bougainvillea.

The flowers themselves form an inch-sized marble (2cm) in the center of these bracts (as these modified leaves are called). In October, single fruits that look like olives form. About 1½ inches long (4cm), they shift to reddish brown and cling to the tree even after leaves have dropped. Each contains 3 to 5 seeds, but, as the Past has taught us, germination isn’t very easy! In Winter, when fruits have started bletting, they become edible.

Other types of Davidia

As shown above, there is only a single Davidia species, of which two slightly different varieties were found in the wild. Over time, after a hundred years of cultivation, other cultivars appeared:

Five fabulous winter-blooming flowers
Even in winter, nature finds ways to gift us with joy and magic, with flowers that are full of warmth…
Poinsettia after blooming – how to make poinsettia red again
Poinsettia gets all the votes at Christmas for its red bracts and ruby foliage match the colors of the party:…
11 plant-me-now melliferous shrubs for pollinators
As appealing to us as they are to pollinators, melliferous plant species are where pollinator insects reign as kings. These…