Fuchsia has magnificent flowers that are simply beautiful all summer long.

Foliage – deciduous
Flowering – May to October

Care, pruning and planting must all follow good practices to have your plant bear very nice flowers.

Favor planting in spring taking great care to enrich the soil with soil mix and even soil conditioner such as manure and seaweed if possible.

In areas with mild climates in winter, you can also plant in fall.

Keep a distance of about 32 inches (30 cm) between specimens.

Care and pruning of fuchsia plants

Cut wilted flowers off as they die, this favors the appearance of new buds.

In fall, cut back as short as you can in November, and protect the foot of the plant with dried leaf mulch for instance.

Be careful if you’re growing fuchsia plants and if you live in a region where winters are cold, you must absolutely grow it in a pot and bring it indoors to a shed or space that is cool but where it doesn’t freeze in winter.

Fuchsia in spring and summer

The entire point of growing a plant in a pot is that you’re able to place it anywhere, like a terrace or a balcony.

But the soil usually dries up much faster in a pot than in the ground, and it helps to water regularly, especially in the summer.

It loves light sun but appreciates shade in the summer when temperatures are high.

Fuchsia in fall and winter

The same advice applies as for specimens growing directly in the ground.

Fuchsia plants aren’t hardy and will need to be protected in areas where the temperature consistently drops below 32°F (0°C).

In winter, pots make roots even more vulnerable to the cold and to freezing, and so bringing the plants indoors to a nice cool and sheltered spot until the winter is over is recommended.

If you thought Fuchsia was spelled fushia or fuschia, you aren’t alone! Two-thirds of English speakers are misled by the pronunciation. Only less than a third among us get it right!

Indeed, the plant was named in honor of a German doctor and herbalist called Leonhart Fuchs. Fuchs is pronounced “fooks”, similarly to “fox”, the wiley animal. “Fuchs” actually means “fox” in German.

However, most English natives pronounce this flower shrub’s name as “foo-shya”, hence the habitual misspelling. Discover easy tricks to remember the correct spelling – i.e., neither fushia nor fuschia. 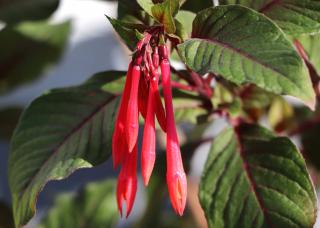 Fuchsia is actually a small tree that looks like a bush and that is native to Central and South America.

Over a hundred species belong to the genus, which makes for a wide variety of colors, flowers and leaves.

The important number of species also makes it possible to spread the blooming season.

It bears magnificent flowers shaped like tiny bells which are noticed for their original shape and the brightness of their colors.

Meet the community
Need advice? Share your garden joys & woes!
Live from the forum
Fuchsia baskets I overwintered – How do I make it flower?

Fuchsia fulgens, beautiful carmine flowers
Fuchsia fulgens boasts magnificent flowers all summer long and large, bright leaves that are very original. Summary of Fuchsia fulgens…
Plants to winterize and how to give them shelter
Not all plants are hardy. Some are more delicate and are vulnerable to freezing. Adequate protection from the cold must…
Fuschia, surprising elegant flowers
The true spelling of the fuschia plant is actually fuchsia. People who speak German have an advantage: the fuschia plant…