Mimosa is one of the most beautiful winter-flowering shrubs, renowned for its exceptional bright gold yellow flowering.

Proper planting of the winter mimosa tree, its pruning and the care you’ll give it will help you have a magnificent mimosa tree, whether in pots or in the ground in the garden.

Mimosa is planted preferably in spring or in fall in a sunny spot and, ideally, sheltered from wind.

If you choose to grow your mimosa tree in a pot for a deck, balcony or terrace, its fragrance will spread in the entire vicinity as soon as the first flowers unfurl.

In regions with harsh winters, your best option is to plant your mimosa tree in large pots so that you may bring them indoors over winter.

Growing mimosa in a pot 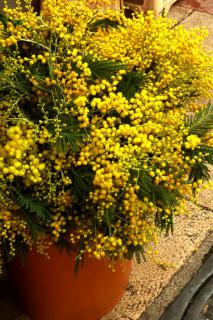 Mimosa is a shrub that will grow very well in a pot or large garden box, even though proper growing conditions must be provided.

After 3-4 years, the time has come to repot it in a larger pot.

Soil mix for growing mimosa in a pot

Use a well-draining potting blend:

Unlike a mimosa tree that is planted in the ground, which can be left to grow freely, a potted mimosa must be pruned.

Mimosa shrubs grown in pots dry up much faster, and must thus be watered often. 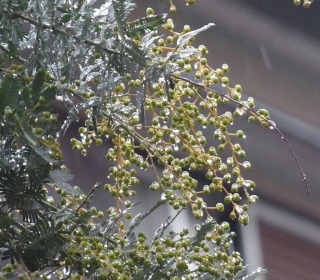 Mimosa tree resists freezing if moderate, 23°F (-5°C) at the coldest. This is especially true when the bouts of freezing are short.

When growing directly in the ground and if the weather freezes deeply in your area, protect your tree by implementing our advice on protecting plants against the cold.

A mimosa grown in pots isn’t as hardy to the cold and must be brought indoors for shelter in a cool spot over the winter if it freezes in your area.

If you transfer a potted mimosa to the ground, remember to winterize it for at least three years. This is especially important if you’ve previously been bringing it indoors for protection. These first three “outdoor winters” will gradually harden the tree until it can cope against freezing on its own.

Pruning and caring for mimosa

Once properly settled in with a developed root system, the mimosa tree calls for minimal care. The only thing you might fear is having a late deep frost spell hit the mimosa tree in full bloom.

Otherwise, mimosa is so vigorous that some people call it an invasive plant. But stand assured: regular care and pruning will restrain its rapid growth.

How to trim a mimosa tree

Pruning of the mimosa tree takes place after the blooming because if you cut the tree in winter, you won’t have a single flower.

If, at the end of winter, you notice branches that are broken and blackened because of freezing, feel free to cut them off because they, too, would weaken the tree.

How fast does a mimosa tree grow?

If you want a low, bushy shrub:

If you want a tall, tree-like shape:

Mimosa will start back from the roots even if freezing killed the trunk off. Nurture the new sucker depending on how you wish to shape your tree.

Note: Always prune your tree just after a split or y-junction with a smaller branch. An alternative is to prune just after (above) a bud that can take the lead and grow. Otherwise you’ll end up hatracking your tree, which isn’t a good thing.

Mimosa isn’t a tree that requires much watering, except when potted, of course. However, it hates excess moisture that has a tendency to make the roots rot, eventually killing the tree.

Watering a mimosa tree planted in the ground 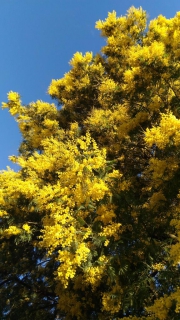 Mimosa is known thanks to florists who sell it in January, when flowers are still in the bud: it already is fragrant enough to spread its scent throughout an entire house!

Its foliage is evergreen and its blooming has a fresh, appealing smell.

A winter-blooming tree, it is also particularly appreciated for the color of its flowers, the fragrance they impart and, most of all, its blooming period.

Winter’s deepest and darkest months is when this tree drapes itself in full color and releases its delicious spring-like fragrance throughout the neighborhood.

You can also take advantage of all this tree’s gifts on your terrace, balcony or deck if you plant it in a large garden box. Simply water it as soon as the soil turns dry.

Now, about varieties: over 1200 mimosa tree species have been numbered throughout the world, and the first ones were introduced in Europe first along the Mediterranean, then along the Atlantic. They’ve spread across the temperate hemisphere ever since.

Smart tip about the mimosa tree

No need to add any fertilizer because a mimosa tree never needs fertilizer, even upon planting. An exception to this is when growing mimosa in pots: the soil must be replenished.

Simple mulch is enough and will keep water from evaporating and weeds from growing.

Your mimosa tree will happily stay small if you prune it often, and if you let it grow it can turn into a tall tree.

Credits for images shared to Nature & Garden (all edits by Gaspard Lorthiois):
Dreamy mimosa branch by Tomoko Uji under Unsplash license
Potted mimosa by Nacho under © CC BY 2.0
Mimosa snow by nofrills under © CC BY-NC 2.0
Tall blooming mimosa by Rosalyn & Gaspard Lorthiois, own work
Mimosa golden flower (on social media) (also on social media) by Nicola Giordano ★ under Pixabay license
Meet the community
Need advice? Share your garden joys & woes!
Live from the forum
Moving house with Winter Mimosa in a pot The seeds in the pods of my mimosa look weird with something red around Mimosa tree propagation, can they be air layered

Black locust tree, false acacia
Black locust tree, which is also called false acacia, is a tree species considered invasive. Black Locust facts, a summary…
Silk tree – proper care and soft pruning for this silk-flowered tree
The silk tree is famous for its very beautiful summer blooming. Care and pruning are among the actions that will…
Propagating a mimosa tree from bark
This method of propagation works particularly well for the mimosa tree. It is especially useful if you wish to replace…