Mimosa blooms in winter with warm, yellow flowers. Grow it in a pot near a window!

Mimosa is a small tree that is part of the Acacia genus. Many love it thanks to its abundant blooming. Fragrant yellow puffs appear at the end of winter. Symbolic of Mediterranean regions, mimosa doesn’t cope well with cold weather, so growing it in a pot is best: you can bring it indoors in winter.

Chose your potted specimen from shorter, dwarf mimosa varieties that grow slowly. A few other key facts will ensure your potted mimosa thrives, such as the type of pot, substrate, location, care and winterizing.

1 – The right pot for mimosa 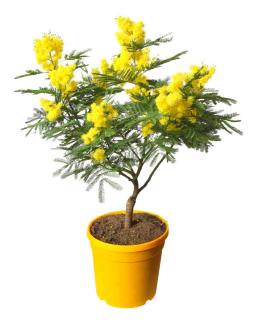 Success when growing mimosa in a pot first depends on selecting the adequate container. This tree will bloom more when it’s in a pot that seems too small for its size. However, it does need to be deep so that the vigorous root system can extend its tendrils.

Use a pot size that is about two times larger than the root ball of the mimosa. Experts say that a container about 20 to 25 inches across (40 to 50 cm) is suitable for trees up to 9 feet tall (3 meters). They can reach this height in 3-4 years.

Much better is to get your hands on a terra cotta pot without any varnish or enamel. Make sure that it has holes drilled through the bottom to avoid sitting water.

2 – Substrate for mimosa in a pot

Since it doesn’t like excess water, mimosa requires well-draining substrates. It most likes light, fertile soil, and having it a little acidic is a bonus (think peat or peat substitutes).

It’s preferable to plant your mimosa in its pot in spring, anytime between March and June. Use soil mix that contains one part heath soil and one part soil mix, with a handful or two of river sand thrown in.

A thick layer of clay pebbles or gravel, about 2 inches thick (5 cm), must be strewn along the bottom. 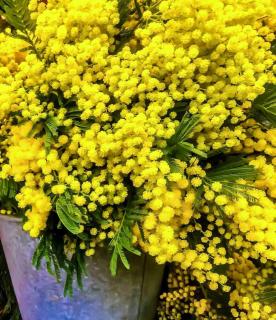 Mimosa is a tree that loves warm and sunny exposure.

When growing it in a pot, make sure it gets at least 4 hours of direct sunlight during the day, especially during the summer season (from April to October).

Remember that potted plants need regular watering, so make it easy to access with a watering can or hose.

Also, try to check that the spot you’ve chosen is properly sheltered from wind.

4 – Caring for mimosa in a container

Potted mimosa needs near-constant watering with rainwater, particularly during the growth phase. This is all the more important that substrate in pots dries out much faster then soil in the ground. As you endeavor to keep the soil cool, check that you don’t overdo it: don’t give it too much water in order to not suffocate the plant’s roots. 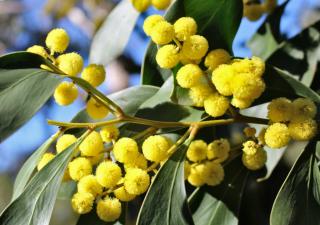 From March to September, give your substrate extra nutrients by providing special flower plant fertilizer every fortnight.

Once the blooming is over, prune your potted mimosa by shortening branches that have bloomed by half.

After the first 3-4 years, start the “maintenance repotting” cycle. Every couple years, in spring, after the blooming, repot your mimosa. If it’s too large, at least topdress every year.

5 – Winterizing mimosa in a pot

Mimosa can survive an occasional, short bout of freezing, down to around 22°F (-5°C). Depending on where you live, you’ll have to bring your potted mimosa indoors between November and March.

Settle it down in a cool room (with no heating) that is luminous, such as a greenhouse or a lean-in. Stop adding fertilizer completely, and only water about once a week.

Bring your pot-growing mimosa back outdoors only when you’re sure it won’t freeze anymore.

If you cannot bring it indoors, do the following:

If one day you transplant your potted mimosa into the open ground, remember to protect it against freezing well. It takes at least 3 winters for the tree to harden and resist mild freezing on its own.

Image credits (edits Gaspard Lorthiois):
shutterstock: New Africa
adobestock: hcast
CC BY-SA 2.0: P’Tille
Meet the community
Need advice? Share your garden joys & woes!
Live from the forum
Mimosa tree propagation, can they be air layered Moving house with Winter Mimosa in a pot The seeds in the pods of my mimosa look weird with something red around

Mimosa, superb winter flower tree
Mimosa, in winter, bears  exceptional fragrant, bright gold yellow flowers. Key facts about mimosa Name – Acacia dealbata Family – Mimosaceae Type –…
Blooming of shrubs one season at a time
To help you choose your shrubs depending on their blooming season, Nature-and-Garden recommends this selection of the most beautiful flowering…
Propagating a mimosa tree from bark
This method of bark propagation works particularly well for the mimosa tree. It is especially useful if you wish to…