Ficus ginseng is a superb indoor plant that many like for its superb root trunk and its very ornamental foliage.

Leaves grow directly from the large root, producing an amazing effect. It is easy to care for, and here is how to water and prune it – and when to repot it.

Although it is easy to care for, Ficus ginseng does nonetheless require a little care to give it all the chances it needs to survive over a long period and in proper growing conditions.

Ficus ginseng rarely ever bear flowers and fruits. In exceptional cases, if conditions are perfect, it might happen: you’ll get a tiny fig!

Ficus ginseng doesn’t require abundant watering, and it mustn’t come too often, either…

Your ficus ginseng will appreciate having its leaves cleaned often with a rag or a moist paper towel.

Ficus ginseng loves it when air moisture is high.

If you consider your Ficus ginseng to be a bonsai, and that you want to keep its shape small, you’ll have to prune it regularly.

Snip new shoots off as they appear for the original shape to be preserved. Or, make it evolve to the shape you wish it to take.

Sometimes the Ficus ginseng comes with small branches grafted on a larger root.

Not only would the ficus change shape, grafted branches will be deprived of sap and die off. Grafted branches are small-leaved, and the root stock is a large-leaf variety.

It might be that your Ficus ginseng is simply watered too much, that it lacks surrounding moisture or light, or that it is set in a place full of drafts.

This is often caused by red spider mite.

This is usually due to mealybugs or scale insects to which the Ficus ginseng is very vulnerable, especially indoors.

Larger leaves appear instead of the cute small ones

This may be because the Ficus ginseng is grafted. The root part is from another type of Ficus. Sometimes, branches sprout from this root part (called the “root stock”), and the leaves are different.

Sometimes larger leaves appear because growth inhibitors had been sprayed on the plant while at the nursery. Growth inhibitors slow growth and reduce the size of leaves. When it wears off, leaves take on their natural size.

Strange branch growing under a twig or from the trunk

It doesn’t bear any leaves, starts off as a light-colored shoot but bark gradually appears.

Native to Asia, Ficus ginseng is grown under our latitudes as an indoor plant. It’s one of the favorite ficus for bonsai.

The word “ginseng” means root in Chinese, and is attributed to this plant because of the magnificent aerial root. However,  its very shiny dark green leaves are equally appealing.

Since it is easy to grow and care for, it is often called the beginner’s bonsai. Its life cycle can span many years, even decades, and the key to a successful life is simply to provide appropriate watering.

Ficus ‘ginseng’ is the common name for what is usually called Ficus microcarpa in the scientific community. The name “ginseng” refers to the appearance of the root. Actually the thick, bulbous stem was an underground part of the plant, dug out and planted about 4 inches (10 cm) above ground level. 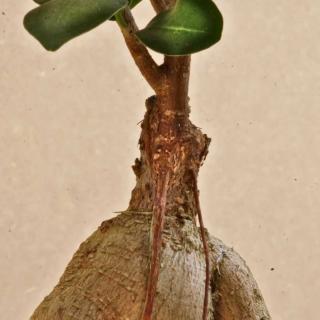 The Ficus ginseng plant is most often simply a Ficus microcarpa plant. However, due to confusion between production centers, consumer stores and the general public, it also came to be known under the name Ficus retusa.

95% of all Ficus ginseng plants sold are actually Ficus microcarpa grafted together with other varieties like Ficus benjamina, Ficus retusa, and lesser-known cultivars filling in the rest.

Confusion with other ginseng plants

Other plants bear a confusing resemblance to Ficus ginseng, too!

When only few leaves are visible, Ficus ginseng is easily confused with another thick-stemmed plant, Adenium obesum. Telling them apart is easier when Adenium blooms.

Ficus ginseng will appreciate spending the winter in a cooler spot, ideally around 60°F (15°C).

Which air-purifying plant to get first?
As they breathe and grow, these plants purify pollutants out from the air... and they're beautiful, too! Discover Ficus ginseng,…
Transferring a bonsai to a new pot
Your bonsai survives with a delicate balance of soil, air and water. Repotting it is a crucial step and is…
Fig tree, generous from North to South
The fig tree isn't reserved to hot-weather climates in the South. Some hardy varieties make it possible to harvest these…