The fig tree isn’t reserved to hot-weather climates in the South. Some hardy varieties make it possible to harvest these sweet fruits even in regions up North.

If you love figs, no reason why not to buy your own fig tree. The great many available varieties make it possible today to grow figs in every setting, as long as it is well chosen and the placing is adequate.

Although some varieties need the extended warmth of the south, where the fall season is still a bit warm, other fig trees can withstand cooler climates such as the ‘Bordeaux’ which bears fruit early, and the ‘Longue d’Aout’ or the ‘Negronne’ which produces fruits twice, first in July and again at the end of August.

All these species are self-pollinating.

How to get your fig tree to settle in

Not a demanding plant, the fig tree is a long-living tree, it can live to more than 300 years!

To thrive, it requires a lot of sunlight and fertile, well drained soil (it tolerates acidic or slightly chalky soil). In cooler areas, set it near a south-facing wall (or south-west), and shelter it from cold winds. This is a tree that grows very well as a standalone, give it space to grow.

Planting is performed in March and April. In mild climates, it can also be planted in fall. Water it during the first summer and mulch. It should already know how to deal with drought on its own during the following summers.

Care is minimal: just add potassium-rich fertilizer in spring. Pruning isn’t necessary, but if you so wish, do it at the beginning of spring. 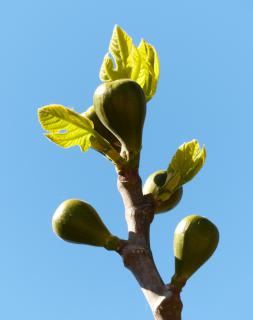 Smaller fig tree varieties can be grown in a garden box which is a good idea if you lack space in the garden. ‘Dalmatie’, ‘Brunswick’, ‘Golden’ are varieties that don’t spread too much, and provide for two crops in summer.

Set your fig tree in a large garden box filled with rich soil mix laid on a thick drainage layer.

Water regularly and bring it indoors out of the freezing cold in winter, when temperatures drop below 40°F (5°C). Repot every three years.

Add a potted olive tree or oleander, a garden box with thyme and rosemary, a sprig of lavender… and you’ll have recreated the Mediterranean on your balcony !

Ficus ginseng, a cute little bonsai
Ficus ginseng is a superb indoor plant that many like for its superb root trunk and its very ornamental foliage.…
Ficus lyrata, the fiddle ficus
Ficus lyrata, the fiddle-leaf fig, is a very beautiful indoor plant. Many find its thick, shiny green leaves very appealing.…
Fig health benefits and therapeutic value
The fig is the fruit of the fig tree (Ficus carica), a species of Ficus native to Syria, Afghanistan and…